We had no specific desitination in mind today - just a need to get west. The flight home was the next day and we were at least eight hours away. Still missing Radde's Accentor, we decided to spend the morning in the mountains and slowly pick our way back towards Sultansazligi where we hoped to find the elusive water.

Our first stop was back at Cimbar Canyon, and if anything it was birdier than the previous day. Warblers were everywhere, and some smart Rock Buntings that we had missed before were at near the road. Western Rock Nuthatch seemed to have increased as well, with at least ten in the first 500m. It soon became apparent however that Mick was not feeling very well and needed to have a lie down - not great with potentially 800km to drive. We cut birding short and got on the road with me driving. We took it slow out of the mountains, with frequent stops to drink water and survey the scenery which was magnificent. In this way the list continued to tick over, with Common Redstart in a small village, Cuckoo at a petrol station, Hobby at a layby and so on.

On the northern side of Sultansazligi/Yay Golu the water proved non-existent, but picking our way through an agricultural area added a decent selection of migrants and our first Lesser Grey Shrike which was unfortunately miles away. Rather than water there was just a huge dry bed - there probably had been water once, but this had been a long time ago. From Sindelhoyuk the satnav took us west along a road that was highly unsuitable for our car and for a moment I thought we were going to get stuck or grounded, but eventually we made it out the other side and onto a proper road near Cayirozu. A lucky stop near here added Golden Eagle, and a short way further a pair of Roller on the telegraph wires. 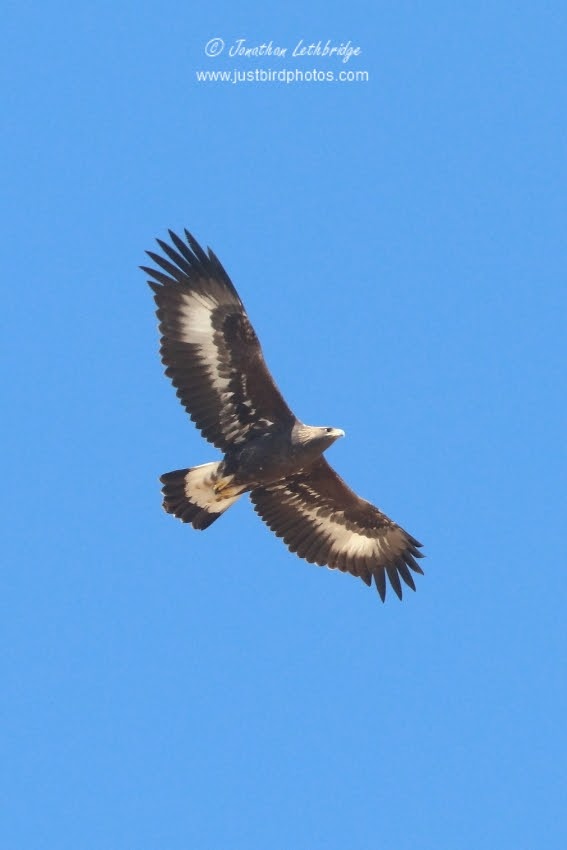 It was somewhere around here that we crashed the car. A car on the hard shoulder suddenly pulled out just as we about to go past it, aiming for a turning on the opposite side of the road, and there was no avoiding it. I braked and steered away as best as I could but we still ended up colliding. The other car had most of the damage - rightly so, a ridiculous bit of driving, but nonetheless we had obvious collision damage on the front wing. We pulled over and a very apologetic Spanish lady got out of the other car. Everyone was OK, and both cars were still perfectly driveable so no real harm done other than potential hassle giving the car back. We had full insurance so were not too worried, but she may have been stung. Which is what then happened to me! As we were exchanging details I got stung by a wasp on my index finger. The lady rushed to her car and got me some anti-venomy stuff to dab on it. Lucky we met you I quipped, but I'm not sure she got it. Anyway, I have no idea what we you are supposed to do if you are in a crash in a Turkey, especially if you are in the middle of nowhere like we were, but we took her rental details, took a few photos and carried on. Here's one of them.

I was still pouring water down Mick, but he was pretty dead and at one point I had to pull over quickly as he nearly threw up. Spotted Flycatcher and Red-backed Shrike wherever this was! When we eventually hit the motorway he fell asleep and as he seemed comfortable I just went for it. The road is excellent and I passed the time by birding out of the window - various Raptors and Larks, the odd Hooded Crow.

By the time we arrived at Yenicaga Golu, 500km away, it was 5.30pm. Mick was still alive, possibly recovering, and we were able to spend the hour before dusk birding. It was actually a pretty good site, with Serin and Kingfisher new birds amongst a decent list. Istabul was now less than three hours away, and so after some food locally we decided to go for it - destination Riva on the Black Sea coast - still on the Anatolian side, but very close to Thrace. We reached this without incident - I had driven 900km, which had taken nearly 10 hours. The next day had almost no driving, and with the flight at 8pm we could take it easy.