There is something I just have to do

These are the words I typed to my boss and my colleagues at 9.30pm on Tuesday evening. Shortly after that I worked out who could cover the meetings I was supposed to be in on Wednesday, sent some more apologies, set my out of office message up and drove to East Yorkshire.

The day had been one of torture. Late on Monday night I had been lying in bed when the news broke of the returning Black-browed Albatross in the Gannetry at Bempton Cliffs. Full of wine and with a full schedule the following day, I sighed at yet another missed opportunity for this dream bird. For as long as I have been a birder I have wanted to see an Albatross. I have never seen one on a seawatch, I have never been ideally positioned when news on one heading down the coast has come out, the Hermaness bird was before my time and the previous Bempton appearances just didn't work. It seemed that this would be one more to simply chalk up and move on. It was still there on the cliff face in the morning, and so my Twitter feed and Birdguides subscription fed me the agonising news of joy and personal triumph all day long. But it returned to the cliff in the early evening....  hmmmm.

Could I? I had a tentative conversation with my boss. No not Mrs L, my boss at work! I mentioned the considerable amount of uncertainty - never great in my line of work, you are either there or you are not, and if you are not generally that requires a fair amount of advance notice. Happily she gave the green light and then I was able to have the hard conversation. Mrs L said I was an idiot, and I explained that seeing an Albatross would make me a very happy idiot. Barring one momentarily distressing update about the bird flying off and out of view, pleasingly soon rectified by an "on the cliff again" message, the evening proceeded exactly as I had hoped and with the bird still in situ at 9pm I decided it was certain to still be sat there on Wednesday morning. Game on. I committed with work and started to gather all the things I would need by the front door.

I have not done an overnight drive for many years. Fuelled by coffee, the BBC World Service and premature thoughts of a nailed on dream bird it was surprisingly uneventful, and I arrived at the car park at about half two. I was not alone. The car park was a hive of activity, and with more people arriving all the time any thought of a short nap went out the window. At half three the sky started to lighten, and as I could see people heading out to the cliff I felt compelled to join them - the thought of the dim shape of the Albatross in my scope in the half light meant I could not contain myself. Nailed on....

I was not prepared for the scale of the task. I think I had just assumed I would bowl up and somebody would give directions and that would be that. As it happened few if any people present first thing knew where exactly it had been seen the previous evening, and the cliffs are absolutely enormous. And on top of this the weather was filthy with sheets of driving northerly rain - I was soon shivering uncontrollably. Dawn came and went and the swelling crowd began to lose heart. Fewer and fewer people were actively looking and some people started to leave, convinced that the bird had departed in the night. By now we knew exactly where on the cliff it had spent the night, or at least the early part of the night, but now there was no sign. Had it perhaps snuck out to sea unseen when the first people had been scanning other parts of the colony? Conversation changed to how foolish we all were to have thought that this bird was a dead cert.

By 7am I was done in. I'd taken a day off work, I'd driven through the night, I was tired, cold and miserable with a big dip under my belt. This is why I don't twitch I rued, what an idiot. Never count your Albatrosses....

At 7.15 someone called it flying out of Thornwick Bay. I saw it momentarily and lost it immediately - for a gigantic bird it was very hard to stay on at range and in the drizzle, and particularly when it flew against the cliffs. There were some keen eyes present though, and gradually the desperate shouts of "where?!" subsided and those key observers were allowed to keep calling it. Well done Mr Andrews and another person I didn't know who repeatedly picked it up and gave running commentary.

The next two hours were a blur. I stopped shivering, I stopped feeling tired, and I certainly stopped feeling miserable! At several points the bird flew at eye level along the cliff at point blank range. This was one of the best birds I have ever seen anywhere, and I can honestly say that being on Bempton Cliff on Wednesday morning rises to close to the top of my best birding experiences ever despite the mass of humanity. This bird was pure unadulterated joy. Its flight was effortless, I don't think I ever saw if flap once aloft. When it came towards us it moved astonishingly rapidly, testament to the mastery afforded by those incredible wings. Think where it hatched, where it has travelled, what it has seen. Like many, going to the southern oceans is on my bucket list but who knows if I will ever manage it. The way things are going you wouldn't bet on it ever happening, but I have now seen an Albatross first hand, seen one wheel, skim, fly and soar. My photos are utter garbage and do you know what? I don't care a jot. No photo can in anyway sum up the feelings I felt or invoke the magnitude of the occasion, although some of the "habitat" shots are pretty compelling. What a bird! Simply magnificent. I think I said quite recently that I find it hard to summon up the enthusiasm for twitching, but for a bird like this I can make an exception. It gets a bad rap these days, and probably rightly so for the most part. but this is something I had to do and I don't regret it for one minute I'm afraid. It was amazing. Is that bad? 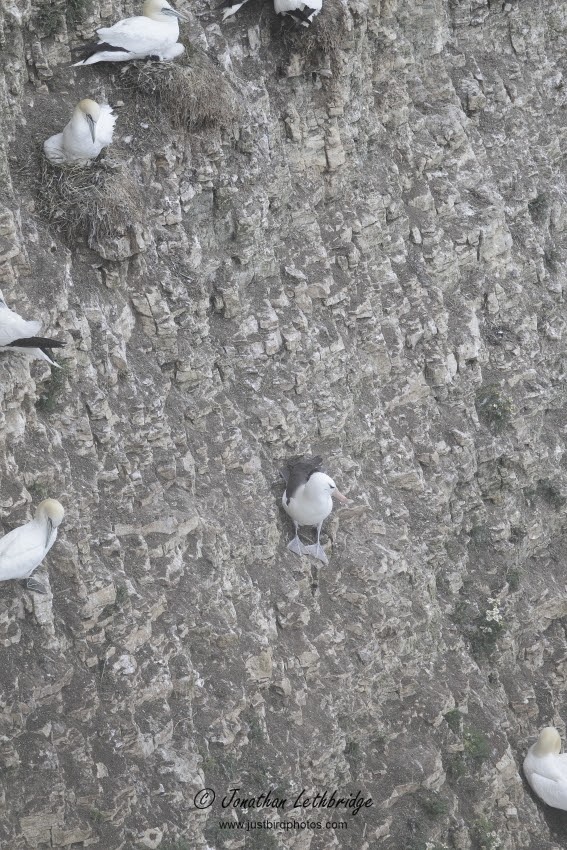 I spent the rest of the day on cloud nine. I managed a short nap on the side of a reservoir whilst waiting for a pair of Caspian Terns to turn up, but remarkably I never felt shatteringly tired, and there were no dicey driving moments at all. I felt so goo that I continued birding until about 11pm, with the evening spent on the Washes with multiple Barn Owl, Marsh Harrier and Hobby, displaying Snipe and Black-tailed Godwit, and various calling Crakes. I felt like birding the Fens all night, but with Thursday definitely a working day I had to leave. I didn't arrive home until after after midnight, 40 hours on the go, but I felt like I could have driven to Cornwall and back again. A monumental day, they don't come around often but I'll remember this for a very long time indeed.