Sneaking a few in

My patch dedication has been less than impressive this year, mirroring my blogging. I may have ‘phased’ in both. As previously mentioned I am not too bothered by this, and sure enough in the last few days something has begun to stir, and what started off as small forays to pick off migrants are turning into longer outings. I think I have timed this perfectly, particularly given all my other interests.

It began a week ago, last Friday, when in danger of missing the largest influx of migrant Tree Pipits any of us can remember for a long time, I snuck out on the patch early one misty morning and was rewarded instantly. There were three birds that day, and I saw either one, two or all of them, it is impossible to say. I also found a Whinchat, another year tick. I wasn’t able to then get out at the weekend, mainly by virtue of being in Belgium, but another quick raid on Bank Holiday Monday netted a Spotted Flycatcher and a Pied Flycatcher in under half an hour, as well as a Garden Warbler.  The following few days were dominated by Canary Wharf, but I managed to get away early on Wednesday and snuck in 5 Whinchat and a Common Redstart before it got dark. This really got the juices flowing and the following morning I walked across Wanstead Flats to Manor Park to catch the train rather than my usual tube from Leytonstone. During this really quite direct walk, which took a little over half an hour, I totted up 5 Whinchat (almost certainly the same birds as the previous evening), 3 Common Redstart, and 8 Northern Wheatear. To say I arrived at Canary Wharf with a spring in my step would be an understatement.

Which brings me to this morning, keener by the day, when I was out at 7am. With more time on my side I was able to linger for longer in the Enclosure. A Garden Warbler, a Reed Warbler, and two Common Redstart, one of which was an absolute belter of a male. Close by 4 Whinchat remained in the brooms, and a Hobby cruised overhead. Tomorrow is the weekend, I am in the country, I am not going to Cornwall/Brittany Booby-twitching, and I cannot wait! 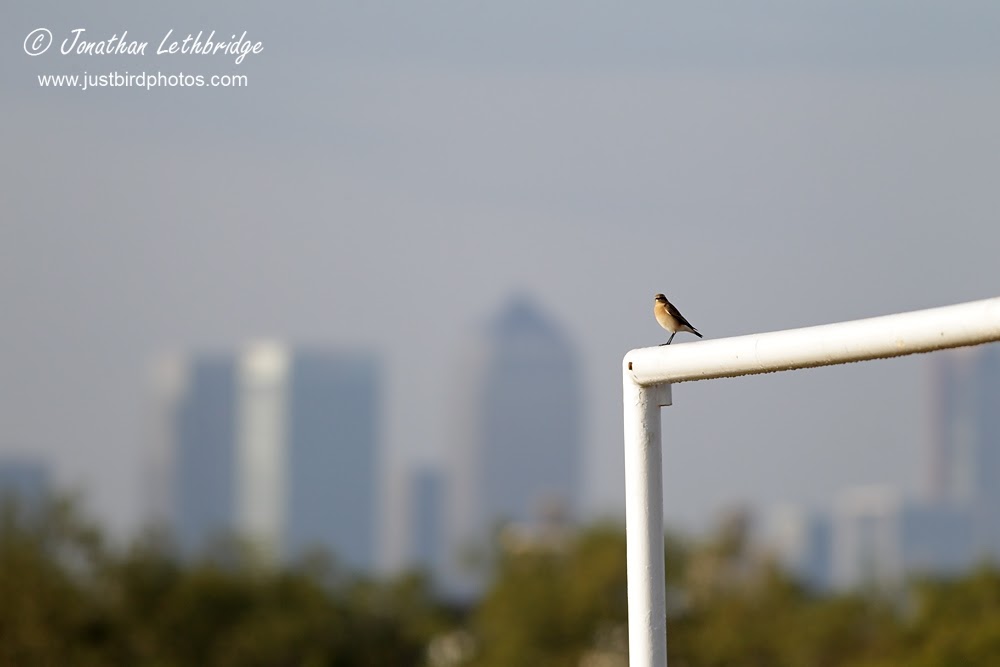 A lot of the birds we have all seen this week are the same birds that have decided that Wanstead Flats is so nice that they are going to stay for a few days. This makes determining how many individuals we have seen very hard, so the best thing to do is to use the concept of bird days. We all understand that this multiplies the numbers, but it makes annual comparisons more straightforward. My totals are meagre, but the overall numbers for August are phenomenal.

So we all know that the Whinchat total is significantly boosted by a group of 4 or 5 birds that have hung around for nearly a whole week in a large patch of Willowherb south of Long Wood. Ditto the Common Redstart, the last few days have seen the same birds remaining in exactly the same spots around the patch. What can be quite illuminating however are the maximum counts, they at least prove unequivocally that we are getting some really rather good numbers, as opposed to a single bird hanging around for weeks on end.  So for example on one day, August 24th, there were 6 Pied Flycatcher reported. On the 27th there were 10 Whinchat, and on the 29th 7 Common Redstart and at least 12 Wheatear. Birds obviously move around a patch during the day, and so this can be somewhat subjective, but we do try and take account of specific locations to assess the likelihood of duplication, and we don’t think this exaggerated. For example we would generally not expect birds near Alexandra Lake at the far eastern end of the patch to be the same birds that are recorded in the SSSi at the western end, though we acknowledge that it can happen. Best efforts really.

Still, I don’t know of another urban patch quite like it, and I am very lucky to have it on my doorstep.
Posted by Jonathan Lethbridge at 20:05