In praise of Hummingbirds


Well I’ve finally just finished consolidating my Costa Rica trip report along with the monumentally huge list. I estimate that the whole thing took me about 45 hours to write. About three to four hours per blog post, depending on the length and the number of photos, three hours for the list, and then about six hours of putting it all together for the final document which I have now loaded up to Cloudbirders. That is some effort, but one I am pleased to be able to do as I rely so heavily on existing trip reports when planning my own adventures. Many of the reports on there are essentially adverts placed there by birding tour companies (and they are very useful for planning), but there are loads written by people just like me. Solo travellers or small groups going it alone. Long may that tradition continue, in my opinion writing detailed birding trip reports is one of the most community-spirited things you can do. I used to just do it in blog form (you can see the posts organised by trip here), but for some of the more exciting trips I have been on lately I’ve scraped the text from each post, subtly rewritten sections of it, added the photos again and saved it as a complete document. Costa Rica is by far and away the longest I have done, and at 69 pages is not really a “handy” size, but in my defence there are a huge number of photos – I had not realised quite how many I had taken. Many of them are absolute garbage, taken in low light through multiple twigs etc, and with dreadful backgrounds. They serve their purpose.

I am far happier with my Hummingbird photos. Largely these are as a result of dedicated sessions – albeit short sessions and generally at lunchtimes – at bird feeders. Some however were “in the field” – wherever there were stands of Porterweed (Stachytarpheta jamaicensis) there were Hummingbirds, and during ten minutes here and ten minutes there I was able to get a few lucky flight shots.

We saw 37 species of Hummingbirds and it could have been more. It was only when I got back and was going through the process of identifying them all over again from my photographs that I realised I’d actually photographed many of them, in some cases quite successfully. It’s worth looking at the Hummingbird section of the list. 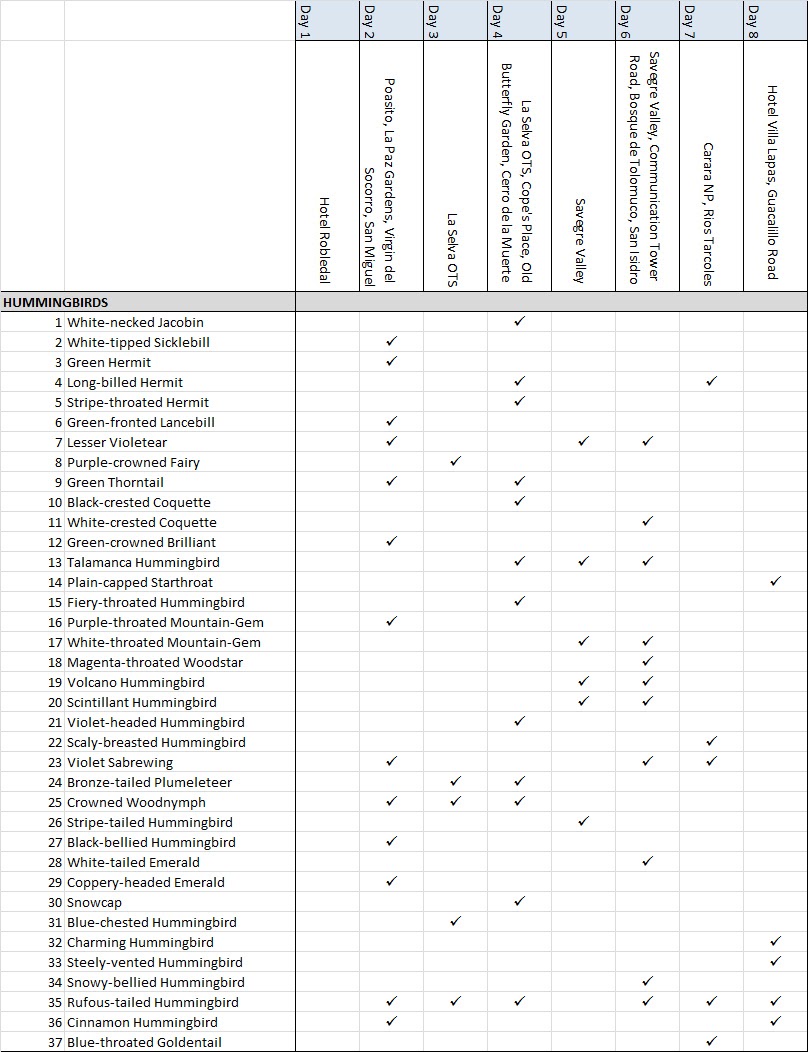 Amazing n’est ce pas? What I find fascinating, beautiful and romantic even, are the names. So evocative. Gems and stars. Fairies and nymphs. Emeralds and goldentails. Scintillants, brilliants and magnificents. Whoever came up with these names should be applauded, they are perfect and they seem to say exactly what your brain is thinking as they dart past. They are brilliant, they are magnificent, they are like sparkling gems as the light catches them at just the right angle and their hidden iridescence beams out. My photos don't so them justice, neither do far better ones, no still image really could. They are masters in their element, controlled and precise perfection. Dare I say it, they might be better than Chats.... Blue and green explosions of life. Glittering, effervescent, shining little sprites that were just magical to watch and extremely challenging to follow. And for the most part absolutely tiny, but with immense character and attitude. The complaints, arguments and fights were prolonged and fierce. Buzzing warfare. Somehow I managed to capture 17 of them, under half, but I'm actually surprised it is that many. Trying to predict where a bird that can, at will, travel in any direction is almost impossible. Sometimes, usually just before landing at a feeder, there would be a slight pause, and this was a tactic I used to try and get them in flight. Mostly I just burned my shutter for no good reason, occasionally I got lucky. I would go back tomorrow simply to photograph Hummingbirds - I have seen what is possible on the internet and that's what I want. With time on my side, patience and several flashguns I reckon I would do better. Do I have a favourite? I don't think I do - the simple idea of a Hummingbird is enough for me. Anyway, here they are.


Posted by Jonathan Lethbridge at 22:37