It will perhaps surprise you to know that at work I am known as a fashionista. Whether this is because I once went to Milan, or because I frequently have something to say about what my team (all much younger than me) are wearing I’m not sure. More likely is that this is an inside joke based on my own low standards of sartorial elegance. To put this into context, my favourite shirt dates from 1999 and I still wear it. It was once white but is now more of a grey colour, and it is fair to say that they don’t make shirts like this anymore. I love it like and old friend, and equate its longevity with unrivalled quality – they made things properly in the last century. I also still wear some shoes that I bought in 1997, although there is a slight element of Trigger’s Broom about those. Anyway, all I am trying to say is that when it comes to fashion I am the last person that should be allowed any say whatsoever in what constitutes as being well dressed.

So naturally this is exactly what I am going to do. I have one major objection to the 2017 ‘look’, and this is the phenomenon of Velociraptor Trousers that seems to be sweeping the nation. You probably know what I am talking about – this is where somebody crafts a perfectly serviceable pair of trousers or leggings or whatever, and then throws them into a cage of raging dinosaurs which then rip them to shreds. The dinosaurs are then distracted allowing the what is left of the trousers to be retrieved, at which point they are then shipped to shops up and down the land where they sell like hot cakes. Seen someone wearing some recently? I bet you probably have as they're everywhere. I simply cannot understand what would motivate somebody to wear trousers that are basically a few threads away from falling to bits. What is even more daft is that they have been deliberately ruined and the whole scenario was completely avoidable. Make the trousers, sell them to somebody. Skip the dinosaurs. 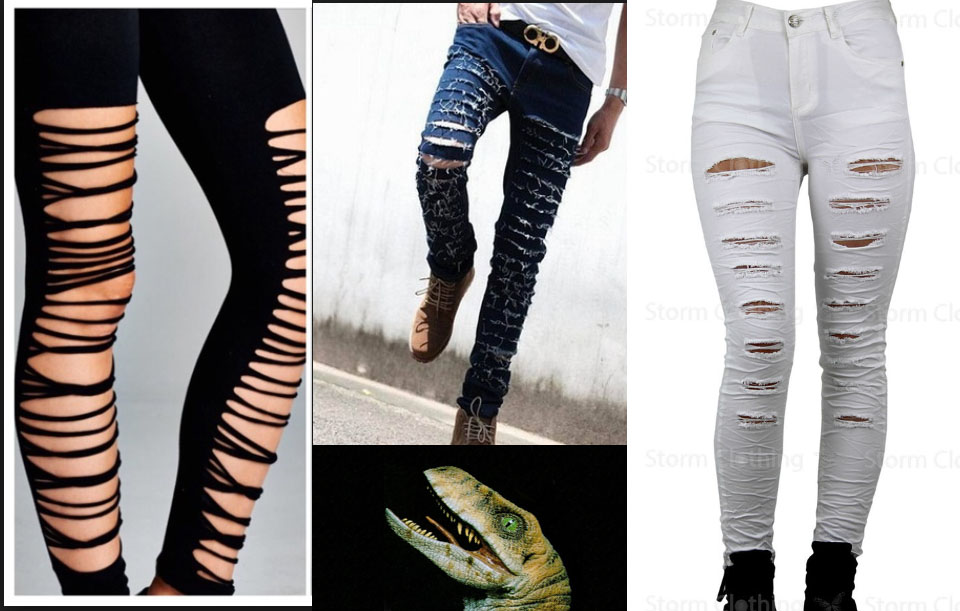 Some of the examples I have seen are probably more slash than actual material. Now I draw the line at wandering round taking photos of peoples’ legs, so I’ve stolen all of these ones from the internet. In the cold light of day tell me that this isn’t ridiculous? One slip or scrape and you’ll have nothing left! I mean some of my trousers do eventually end up looking a bit like this, but that’s only after a decade or so of exemplary service and it is always a sad day when they finally give up the ghost. To deliberately waste ten years of good wearing is nothing more than vandalism. Just say no!

Sorry about this, but as this is obviously a birding blog it would be remiss of me not to stay on message. On Wanstead Flats last weekend I saw, amongst other things, a Tree Pipit, a Yellow Wagtail, and three Whinchats. Not sure what else the autumn has to give at this point other than Ring Ouzel, but I live in hope.
Posted by Jonathan Lethbridge at 22:48