Twitching is easy provided you see the bird. Despite my recent record of seemingly going for everything, I'm actually a very cautious twitcher, and let's not forget that it's winter, not much turns up, and those that do tend to stick. I think I waited over two weeks or more before going up for the Pine Grosbeak, and I waited even longer for the Harlequin. In fact I was in Scotland on the way back from the Grozzer when news of the duck broke, and carried on south. Over five weeks later and the Harlequin was still there, so the trip was on - again a four day break. I'm just not up for chartering up there and doing in it a day - that isn't birding. I guess it also means that if you dip you can come back with your head held high and pretend to your mates that it was still a great trip well worth doing....

We didn't dip. One day I will come a cropper for certain, but for now I am maintaining what I consider an enviable record, and seeing some great birds in some great locations - and on my own terms. Once again Bradders was the filthy catalyst, Nick was happy to come along for the ride, and the fourth member of the Uist team was made up by Bob, local birder and one-time lapsed twitcher. Clearly North Uist is not easy to get to, and as Monkey pointed out to me, 40 hours between leaving and seeing the bird is pretty extreme, but nonetheless I'd still say it was pretty easy. As with the Grozzer, the tactic was to leave in the early evening and get to Carlisle and our favourite Travelodge, and last known location of a tube of Colgate..... 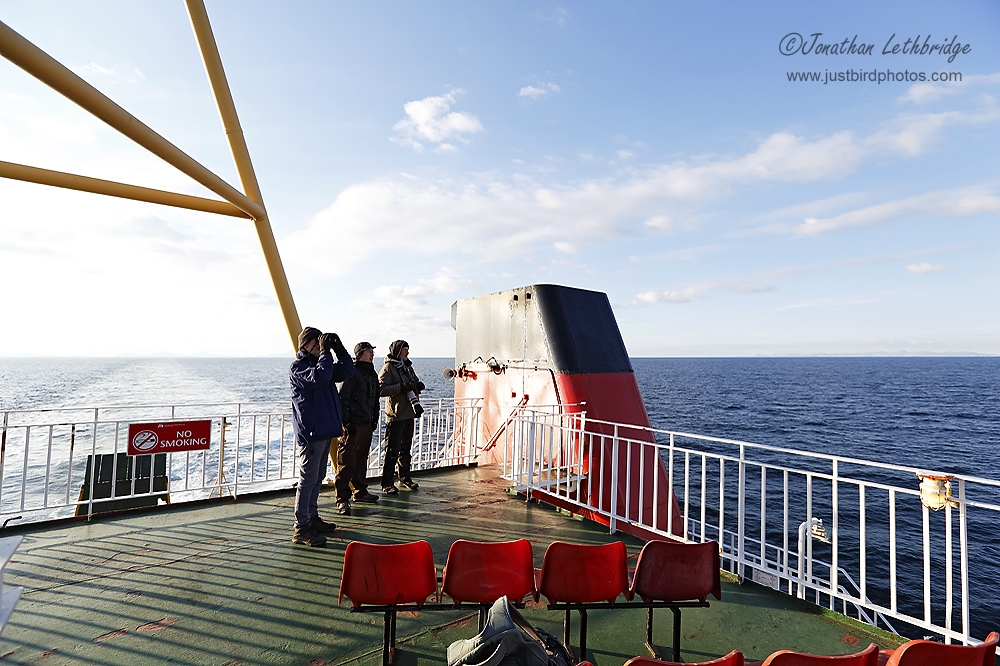 Next morning and all we had to do was to reach Oban for 3pm, so naturally we called in at a few bits and pieces on the way up, namely my fourth Blue-winged Teal (Dumfries) and my fifth Lesser Scaup (Clyde). Ditching the car at Oban in the free carpark, we boarded the MV Lord of the Isles for our five hour crossing to South Uist in glorious sunshine. Manx Shearwaters and a few beers shortened the crossing considerably and at 9pm we docked at Loch Boisedale and picked up our hire car with minimal (read none) paperwork, and were shacked up in a bunkhouse a short while later for the princely sum of £10 a night. It was probably worth no more than £7.50........

Next morning (Good Friday) and we awoke to Greenshanks and Oycs, Twite on wires, vocal Starlings, and simply magnificent scenery. To think that I'd been in Canary Wharf only a couple of days ago was just bonkers, but there you go - easy. We didn't hang about, the Uists are long and thin - we were at the Southern end, the bird was, we hoped, at the Northern end. It was. Disappointingly there were five twitchers already on site - that said, for an absolute mega this is minimal - imagine something similar down south. There's an argument right there for only twitching remote islands..... The Harlequin was bobbing about on a sparkling Atlantic Ocean, and stood on white sands we soaked it all in. Many of you will have read Mark Cocker's excellent Twitchers: Tales of a Tribe. In it he describes seeing the long-staying Steller's Eider on South Uist. Although back in those days it was clearly a much bigger deal to get to the Outer Hebrides, especially if poverty-stricken and hitching, it felt much the same. Wonderful. Gradually the tide receded and I was able to close the distance by inching out along a rocky peninsula, until the Harlequin was only 30 or so metres away, with St. Kilda visible in the distance. Brilliant, simply brilliant. 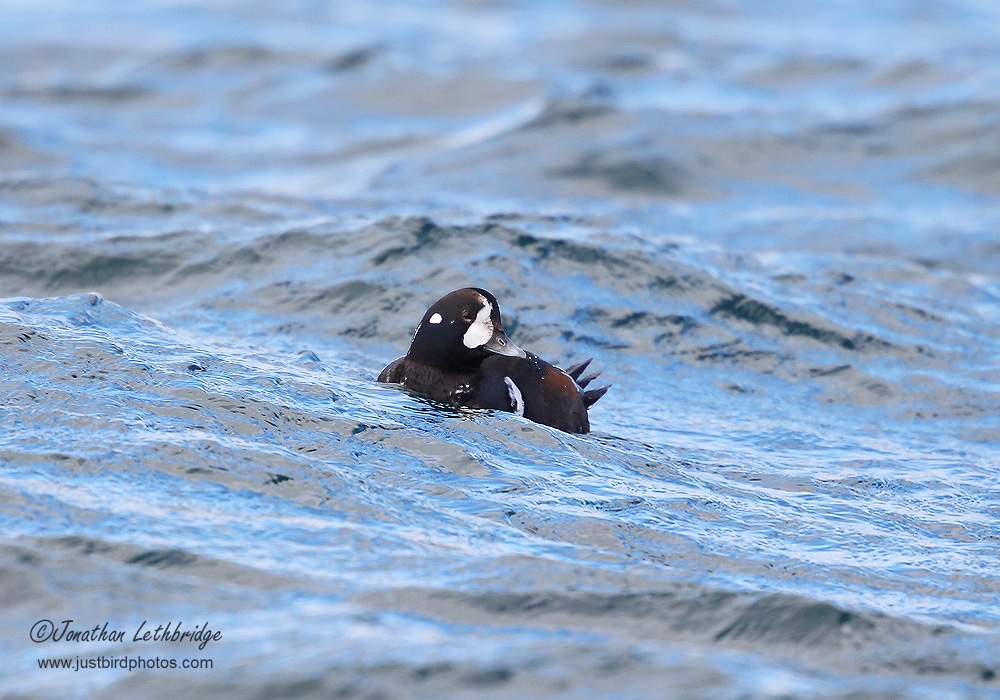 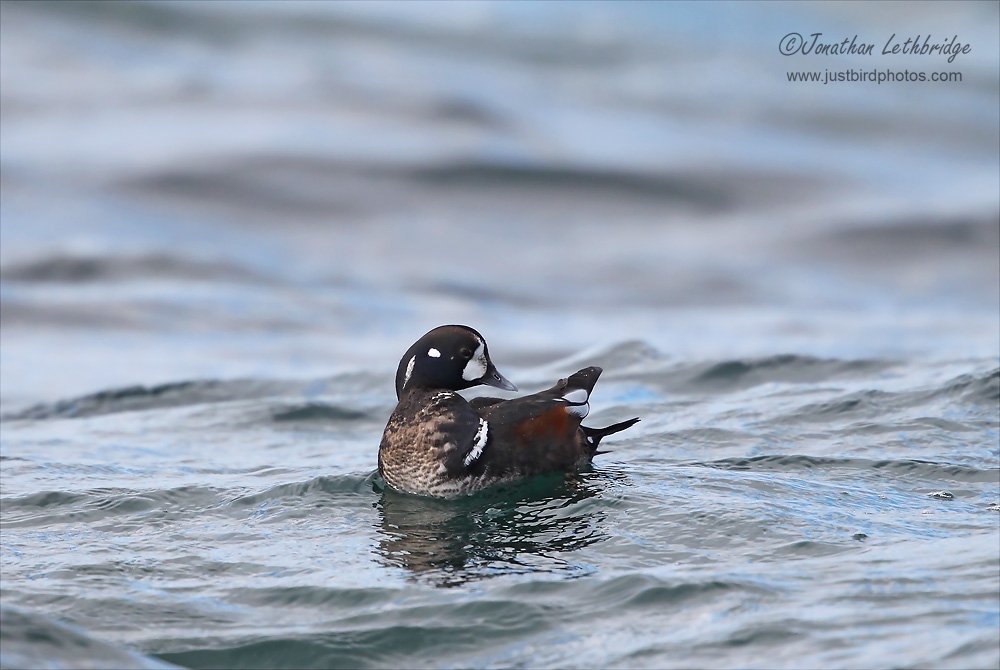 We probably spent most of the morning at Balranald, most of it with this very special duck. Dragging ourselves away, we began birding properly. Ring-necked Duck fell quite quickly, my fourth of those and also the fourth yank duck of the trip. Eagles soared in the distance, and wild Barnacles and Greylag were everywhere, with the constant backdrop of singing Skylarks and displaying Lapwings. The next main target was the Richardons's Canada Goose, basically a tiny little Canada that has definitely come from across the pond. I am pleased to say that my knowledge of CG taxonomy has moved on a great deal since last week, and so when we finally found it in amongst a thousand Barnies I had no doubt at all what I was looking at. Ahem. It's a strange thing, but could you describe a Canada Goose? I mean really describe? What is the face pattern? Where does the black end? Neck collar or not? What colour are the flanks? And yet I see Canadas every day - they are omnipresent and invisible. I don't mind admitting that after picking through Barnacle Geese for an hour I basically couldn't describe a Canada Goose to you. Eventually we found it, and of course it was obvious, but it was an interesting lesson. I can't tick it yet, but the hope is that the BOU or whatever committee it is add it onto the British list very soon, at which point the other committee, whoever they are, can then start going through all the records and accepting them. Since getting home I've had a quick look at Sibley and it's definitely a Richardson's, and the location and carrier suggests wild origin. I'm going to be good though, and not count it until it's accepted - this is inordinately hard as it would be bird # 399 for me. Yes, the same 399 that is very close to 400. I realise that this small fry in the great British listing scene, but I'm not a twitcher, so I'm doing really well.


We enjoyed a great day birding the top of North Uist, picking up an adult Glaucous Gull and a host of other good birds. To be honest, seeing roadside Lapwing, Oystercatcher and Redshank almost constantly is pretty awesome. Birding a local patch in London (sometimes!), to get good close views of any of these is practically unknown. The treat of the day however was to be the hostel at Bernaray. Bradders and Mrs Bradders had been here many years ago, for a night that turned into a fortnight, and I can see why. Here are a few photos of dawn the next morning - many apologies for these possibly outnumbering photos of birds, but that's simply a measure of quite how much I enjoyed this place. I'm actually thinking of taking the family back for a summer holiday next year - top marks from this birder. 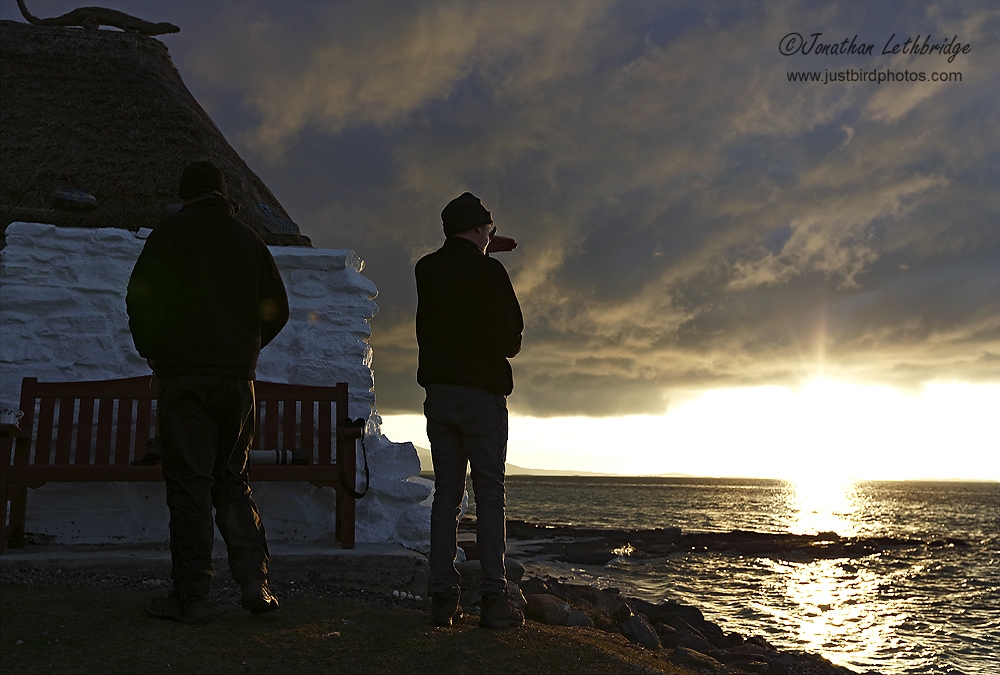 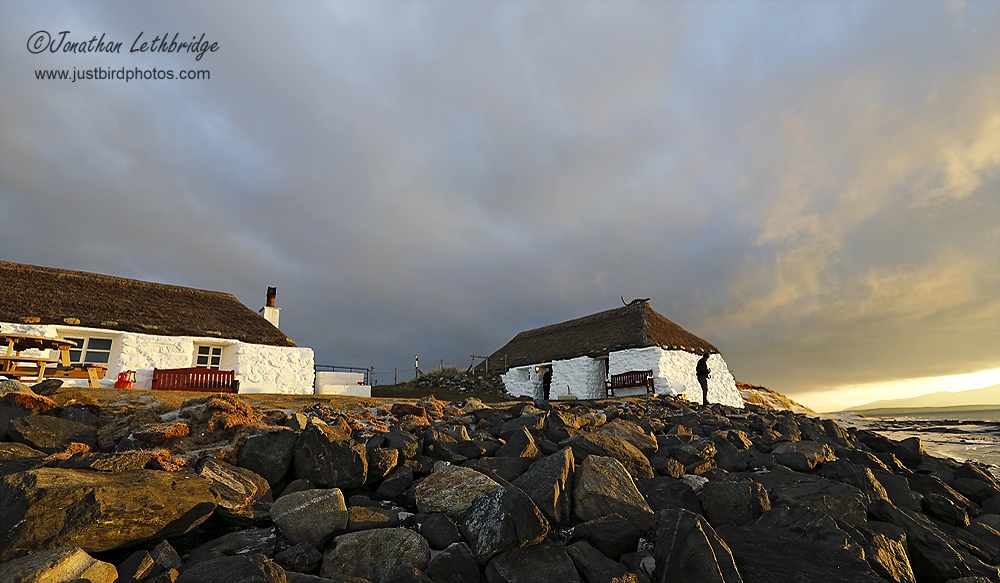 Bob, Nick, DB and I celebrated our latest megatick with a slap-up meal at a local restaurant. Hand-dived Scallops were so excellent that I forgot temporarily that I didn't like Scallops, and the very understanding staff agreed that it was for the best that they sent us on our way with two more bottles of house wine. These we consumed in the communal area of the hostel, a thatched building with a real fire, good company, and a sense of deep satisfaction.
Posted by Jonathan Lethbridge at 21:00