Just a short long-winded note to highlight a minor change to the links section. I keep coming across great bird photos on the net – there are some hugely talented people out there. Most invoke in me feelings of pure envy, and this is why up until now I have never linked to them. Artie Morris is the sole exception, as his level is stratospherically different and I know I will never even get close.

Casting humility aside for a moment (rare), I pride myself on taking a good photo (not that I can’t take a crappy one, of course I can. And I do, frequently. But I hardly ever put them up here, as I don’t want readers to think I’m a big numpty, you know, one of the “all the gear, no idea” brigade that you bump into frequently. So, generally, between here and my apparently useless photography website, you see the cream of the crop. Show me a photographer who would act any differently). I like to think that plastering good photos all over my blog helps to differentiate it from the many blogs out there that don’t do that. That and my elokwunt proze. Dispensing with humility altogether, I see very few blogs with photos that are as good as I think mine are. But there are some that I think are regularly top notch, and when I find them I seethe am very impressed, and I visit often. But I have arrogantly and selfishly not linked to them as by doing so I will expose my inadequacies and people will realise that actually I’m not that good. Well, goodbye pride. I have decided that you cannot get enough of a good thing and so I’m going to build up a little collection of links to highly impressive websites or blogs that showcase some of the unbelievably and annoyingly good birding photographers out there. Some do it for a living, some are just keen amateurs, but they have one thing in common; they're consistently good. If you know of others, send them my way!

Looking at other peoples’ photos, especially ones that are a lot better than yours, is one of the best ways to improve your own output. It’s not as important as being outdoors and pressing the shutter button a lot, but it’s certainly a better investment than going and buying the latest and greatest camera, or trading your car in for a large lens. It has often been said that a good photographer can take a good photo no matter what equipment he has. I’m sure that’s true ( although when we’re talking about birds as subjects, there is probably a minimum standard) and so most of us are limited by our skill and not by what we use. That doesn’t stop lens lust, but it’s a sobering though when contemplating parting with many thousands of pounds.

I spend a huge amount of time looking at other people’s photographs, probably more time that I actually spend taking my own, tragic though that sounds. As well as feelings of intense jealousy and irritation (eg Rebecca Nason’s second Roller photo....), I’m also very analytical. If I think something is good, what is it that makes it good? Is it the light or the exposure? Is it the bird’s pose? Is it the eye contact? Is it the position in the frame or is it the colours? Or is it just technically brilliant, ie really difficult to achieve, and thus the photographer has pulled a blinder? Where I can, and sadly not all websites allow this, I download the photo to look at the exif (the technical data). What lens was used? What shutter speed? What aperture setting? This can only tell you so much about what went into taking it, but it gives you an idea. But by putting all these things together I mostly work out what the person has done to get that shot, and inevitably I wonder if I have squandered a similar opportunity at some point. Often, I have. So I start to wonder if I could get a similar photo, or even do better - most the people I have linked to post photos up at one stage or another that I have looked at and considered substandard, at least relative to their usual output. I also start wondering where I might go, and what I might do. And then of course I just sit on my arse and browse birdforum, when really I ought to be out there, even if it’s just photographing Mallards on Alexandra Lake, or Starlings in the garden. At this time of year there is oodles of light after work, and yet I hardly ever go out. Why? Well, being perfectly honest, it’s because I’m knackered. I’ve likely spent nine hours at a desk, and I’m hungry (though a little starvation wouldn’t go amiss....). I want to see the kids, chat to them about their day. Sometimes I even want to talk to Mrs L! Do I forego all that, grab the camera and shoot straight out? Of course not.

The reality is that most birding photographers suffer from an intense lack of time in which to actually go birding OR take photographs. This means that during those few hours when they’re free from all other distractions or responsibilities, if a bird actually comes near enough to them to get a photo (or maybe it doesn’t even come near enough!), they’re going to, like me, be overcome with excitement and nerves, and likely stuff it up in their eagerness to get a shot. Getting great photos takes time with the bird, and it’s rare that you get that opportunity. The best photographers spend huge amounts of time creating those opportunities. The bowl up and shoot brigade, of which I am a fully signed-up member, get far fewer opportunities. Consequently, they take far fewer decent photos. The Mistle Thrush Little Bittern on Saturday was one of those rare occasions for the bowl up and shoot brigade, where if you knew what you were doing, you could get a killer shot. A close and confiding bird, decent light, lots of time in which to fine tune your exposure, very slow-moving and mostly predictable - and so when it finally came out in the open, you could have the shot composed in advance. In the shot I’m most pleased with, it literally walked into the frame - the correct focus point was already set, one click and I was all done. If I’m being ultra-critical, I know that I’ve taken slightly sharper shots in the past, and I wish that the water had been stiller for a more precise reflection, and that the two pale and vaguely horizontal reed stems in the foreground were not there - I may yet have a go at deleting them, but overall I’m very happy. 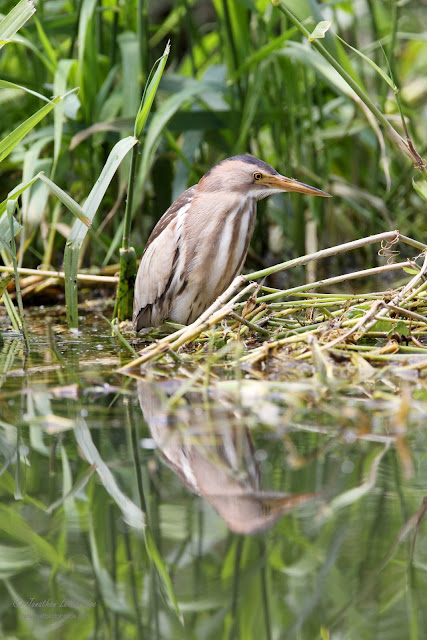 Which brings me to my final point in this excessively long post (and dull, if you’re not into taking pictures). The need to be self critical, and very strict, is huge. Why on earth did I post that photo of a Cuckoo the other day? It's washed out, small in the frame, and has branches all over it. Fail. Going much further back, what I felt was the best photo I had ever taken ever, a year ago, I would likely now bin without a second glance. I cringe when I look back at this blog last year or the year before, and despair at the rubbish I posted up. The verbal rubbish of course continues unabated, there is no curing that, but I hope you agree that the photos are mostly getting better.
Posted by Jonathan Lethbridge at 20:05