Doing nothing on Mull

My usual style of holiday blog post tends to be day by day. Were I to do this for my recent family holiday to Mull, each day you would get to read about how I sat on a bench consuming liquid calories and admiring a wonderful view. It was a magnificent view, but reading about it for six days on the trot might make this blog even duller than usual, so I propose a slight change. For starters though, here is the view. Horrible isn’t it. 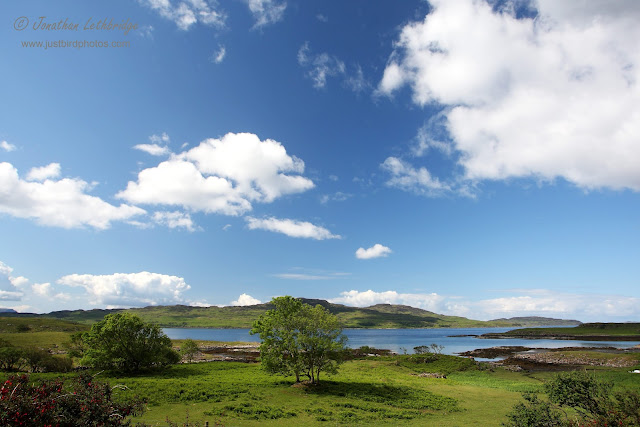 Although not much happened, the odd boat, the odd Gannet, the odd Eagle or Hen Harrier, I found myself transfixed, and this largely accounted for a holiday spent not doing a lot.  This was perfect, just what the doctor ordered. Birding holidays are knackering, and after Norway and Bulgaria in relatively quick succession, I needed a break. This was a proper holiday, with a proper lack of ambition. I am brilliant at doing nothing, and spent the week proving it.
Beyond sitting around doing zip, there were three things I wanted to do
1)      Hear Black Guillemots squeaking in Oban Harbour
2)      Take the family to see Puffins
3)      Go to Iona for Corncrakes
So let’s deal with the sitting around doing nothing part. I had booked a cottage on the basis of a single photo and some vague knowledge of where it was, and the setting turned out to be perfect for a lazy family holiday.  It was on the northern shore of Loch Tuath, with a view over to the isle of Ulva, and out west towards the Treshnish Isles and Tiree. If I wandered down to the shore and looked left I could see Ben More, the highest peak on the island, and if I looked right, out towards the open sea. From the cottage itself, the panorama was sensational. I wasted hours. 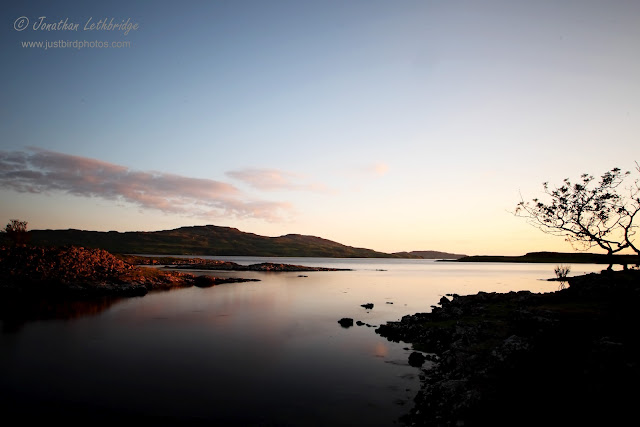 There were sheep in the “garden”, and across the road (fifteen cars a day? twenty?) a field with iris beds and a stream sloped gently down the shoreline. For the children this was extremely liberating, and we were perfectly happy for them to cross over and explore, and with the added security of two-way radio contact (which was generally used for bird reports rather than to advise of near drownings) we sometimes didn’t see them from one drink to the next. I had bins obviously, and caught glimpses of them now and again, but we could never do this in London. This is a real shame, as it would be wonderful to just kick them out onto the Flats after school and have them come in for dinner, tired, scuffed and muddy, when they were ready. This is of course how children used to grow up, and even though I am very very young compared to most birders, I remember being allowed out to play for hours and hours. Partly the difference is that I lived in a cul-de-sac in Cambridge, rather than in London, but mostly it’s a sign of the times. The greatest fear is of abduction, but there were probably just as many freaks and weirdos out there when I was a child as there are today, but now each and every case of a child disappearing makes the headlines, and as a result parents are far more reticent to let children out of their sight, and I’m not going to be the one to buck the trend. So few children are allowed out and about by themselves these days that the pool of potential targets, for want of a better phrase, is much reduced; ergo any children that are allowed out are at higher risk than would have been the case when there were loads of children running around all over the place   – that at least is my logical conclusion. Still, far more dangerous is the increased traffic, especially where I live, and the tendency – not precisely where I live, but certainly in surrounding areas - for mindless violence, even amongst children. This I think is different to when I was growing up, even if Cambridge was relatively genteel.
Today kids carry knives. In my day people punched each other, kicked each other. I got punched on the way home from school once. Yep, in middle class Cambridge. I remember it well, and so I hope does Daniel whatever-his-name-was – it was unpleasant, but survivable.  If you get stabbed, the outcome is more uncertain....   It sounds unlikely still, and so I ask myself, who would stab an eight year-old? And then I read in the paper about ten-year olds carrying knives. And I also read in the paper about material acquisition being the dominating factor in most children’s lives – playstations, x-boxes, mp3 players, mobile phones, tablets and so on. And with life getting tougher, the ability to acquire these essential and kudos-enhancing items in a legal and earnest manner also gets tougher. I got mugged; the kids - for that’s what they were, likely no more than sixteen - wanted my phone. I gave it to them, but they hit me anyway. It confirmed what I already knew, more than a few kids don’t look up to their elders any more. Although my children don’t (and won’t) carry phones etc, that fact alone is so unlikely that they would likely be hit anyway, or worse.
I had not meant this to turn into a moan about a society in decline and the rapid degradation of moral fibre. But now that I’m back, it means my children are once again confined to the garden after school. Show me any responsible London parents who operate differently. It’s very sad, but that’s just the way it is. Kids, if you’re reading this, I’m sorry – the world is not the rosy and carefree place that you believe it to be, and I will shield you from the reality of it for as long as I can.  But when it comes to telling it like it is, I won’t hold back. Anyhow, the metropolis of Ballygown on Mull suffers from none of these problems (or none that have hit the national press!) and I was delighted that the kids could finally have the freedom to roam that is denied them at home. On Iona we met a local family whilst our children played together on the beach. They confirmed that their children basically had the run of the island. It’s small and everyone knows everyone; dangers of the sea aside, it’s a safe place. Whilst their children were having what seemed like a fantastic childhood involving sandy beaches and no constraints, was it too isolated perhaps? There was no secondary school, so once they reach that age they have to board in Oban during the week, and that sounded miserable. Maybe you enjoy it while you can, and move at that point? 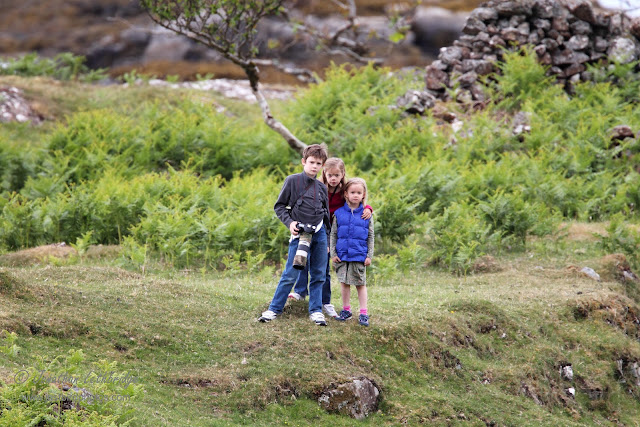 So the kids did what kids should be doing. Crabs were discovered in rockpools; a dead one became a prized possession for a while. Shells were collected, and hills and trees were climbed. Injuries were remarkably few and minor - some grazes, a couple of bruises, nettle stings and midge bites. We took it all in our stride, and enjoyed what the bay had to offer. Wheatears and Rock Pipits bred on the rocky shoreline, Common Sandpipers bobbed. Swallows were nesting in the barn next door, but remained unseen as it was locked. Far better were the House Martins on the side of the cottage constructing a new nest, or perhaps repairing an earlier structure. We watched them fly into the field, collecting mud at the stream, and come back to add it on. I tried waiting by the stream, but they simply chose another. Most days we saw a ringtail Hen Harrier quartering the iris beds, and Buzzards (Gah! Somebody shoot them!) were usually overhead. The piping of Oystercatchers was a constant feature in the landscape below the house, whilst the chimes of Willow Warblers were ever-present above. With glorious weather every day, the place was the closest I have come to idyllic in a long while. It took thirteen hours door to door, but once you’re there you forget about that bit, especially when you see a White-tailed Eagle on the crossing, and come face to face with Black Guillemots squeaking at you in Oban Harbour. 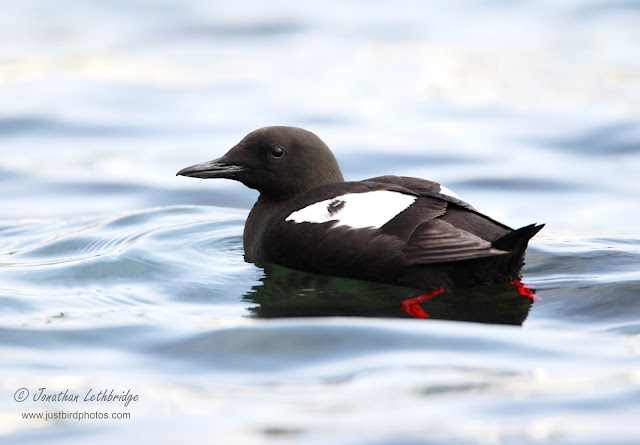 Posted by Jonathan Lethbridge at 19:31