A Lot of time at Rainham

In a last gasp attempt to get a few more ticks before the year comes to a close, I've basically been camping at Rainham for the last few days. This has proved moderately successful, with a new site tick in the form of a superb male Goldeneye on the river. Never a common bird out on the river, it's a bird I have been hoping to get there for some time, and I timed it just right.

We arrived on the sea-wall hoping for a Pale-bellied Brent Goose, but that had gone, and as we met up with the small group of hardy souls, Howard called the Goldeneye. Wow! What luck! As it happens, the PBBG wouldn't have been a tick as it is only a sub-species - I just wanted to see it anyway, it's not a taxon I see very often - and instead I came away with a real actual tick - my 183rd species at Rainham, and 164th this year. I'm still very much in the second division of Rainham listers, but another couple of years like this one, and I may crack the magic 200. I'm not setting that as any kind of goal, it will happen when it happens. 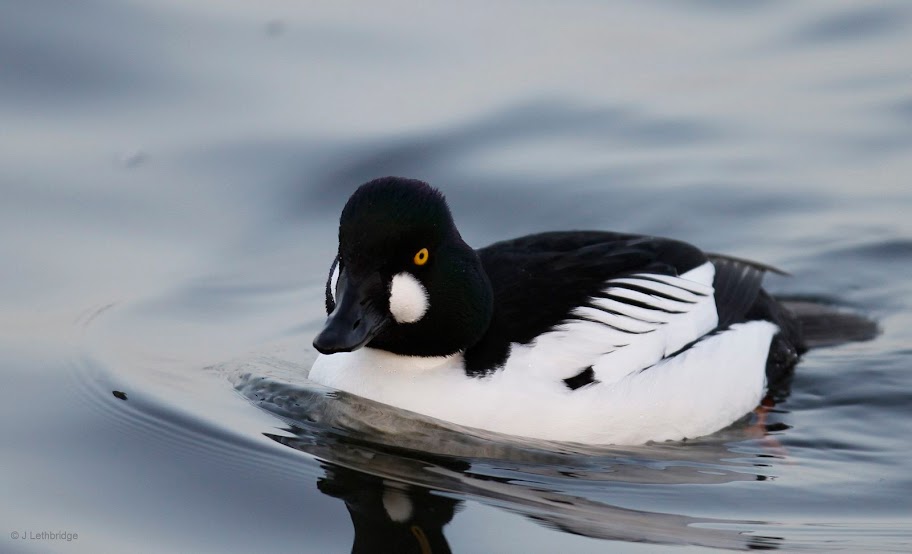 NB, as is customary when I have the kids, I don't carry a camera. It would be too much to concentrate on, and I prefer to make sure they're not falling into rivers and so on. However, I do wish to illustrate that drake Goldeneyes are nothing short of fabulous, so please note that this photo was taken last year at Hogganfield Loch near Glasgow. We simply don't do faked photos on this blog.
We all got a bit cold on the sea-wall, so retired to the Visitor Centre for some warm lunch. This was gratefully received by a gaggle of small people, and I spent the remaining time there being a wimpy birder and looking out of the window. This was a stunning success, with a group of 19 Bewick's Swans flying past down the river, and then 15-20 Waxwings landing in the bushes outside very briefly before whirling around and back over the centre, and thus making my bridge tactics from a couple of weeks ago look increasingly stupid. The Bewick's were especially welcome, as the two I had seen earlier in the year were basically silhouettes in the dark.
I spent today at the reserve today as well, and although the birding was much more subdued than yesterday, a Brambling visited the feeders. This is a fairly unusual event, and I was able to get a photograph which was especially pleasing, as this is one of the few species on my London yearlist that I have no concrete proof of having seen, despite having seen five this year - no photos, and no other observers. Not that this matters, I would hope people trust me, but after last year's shennanigans, and especially the role I played in helping to expose them, I've felt under pressure the whole way through to document what I've been seeing. So, I hereby present firm evidence that I, Jonathan Lethbridge, didst see a Brambling underneath the feeders at Rainham on December 23rd this year of our Lord 2010 at approximately 13:17 GMT, and that it was good. 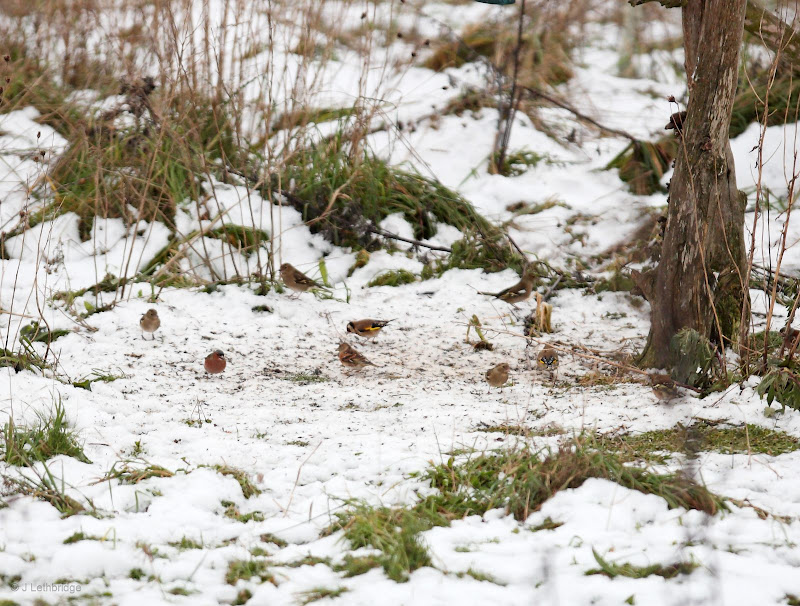 Only a few more days to go, and then I can stop all this ridiculous listing nonsense. If you want to read more thoughts on listing, the latest edition of Birdwatch Magazine apparently has an excellent article in it, well worth the subscription price alone, and you can also get a free pair of trainers. Win win.
Posted by Jonathan Lethbridge at 18:01