JL vs The Gulls of the Thames Estuary, always a thorny subject. Basically this is my attempt at getting better at Gulls. For a beginner birder, Gulls are scary. So scary that for many years you just avoid them. Far too difficult, oh look, a Mallard, I'll look at that instead. When eventually you do pluck up the courage to look at Gulls, you'll get relatively confident with the small ones, but hang on a minute, check out all those big ones! Whoa! You scurry back to the comfort and security of the Mallard... 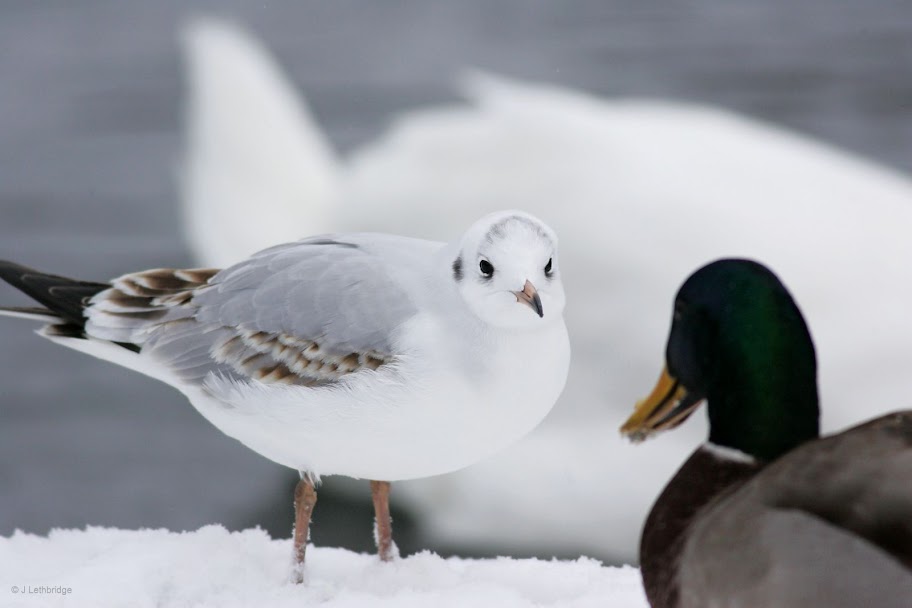 Mallard looking at some white bird

Some more time passes, let's call it "the summer", and then, like some kind kind of guilty secret, you find yourself sneaking a look at those big Gulls. You pick through a pile of them, and count about 125 distinct species. Brown ones, brown ones with a bit of grey. Ones with flecking on the hood, ones with clean white heads, ones that are a bit in-betweeny. Consulting a field guide, you realise that despite the hundreds of species you just saw on the tip, there are actually only three large species of Gull you're likely to see, and then two others that you might possibly see. Oh, and then another two that are entirely made up as no-one, bar no-one, could hope to identify them. So what about the other 118?

The cock-ups come thick and fast, and before you know it, the score is 8-0 to the Gulls. This means that you have tentatively pinned an ID on a Caspian Gull, a decidedly tricky one, and everyone you have shown this to has instantaeneously called it a Lesser Black-backed. You retreat to the safety of Mallards.

But of course, you are irresistibly pulled back. You know Gulls are evil, you know that they are wrong, but like all forbidden fruit you cannot help yourself, and before you know it your nose is once again pressed up against the chain-link fence at the local tip, inhaling Gull. And other aromas. At the end of last winter, the score was 8-3 in favour of the Gulls. After all the myriad failures, I had somehow managed to chalk up three points by correctly identifying two Caspian Gulls, and then picking up a juvenile Glaucous Gull.

I'm actually belittling myself, I've spent what must be a huge amount of time going through Gulls, trying to teach myself, trying to get to grips with them. I've spent time with people who are actually good at Gulls, and who have graciously helped a Gull novice and seemingly a hopeless cause. Gradually it is working, some of their skill is rubbing off. 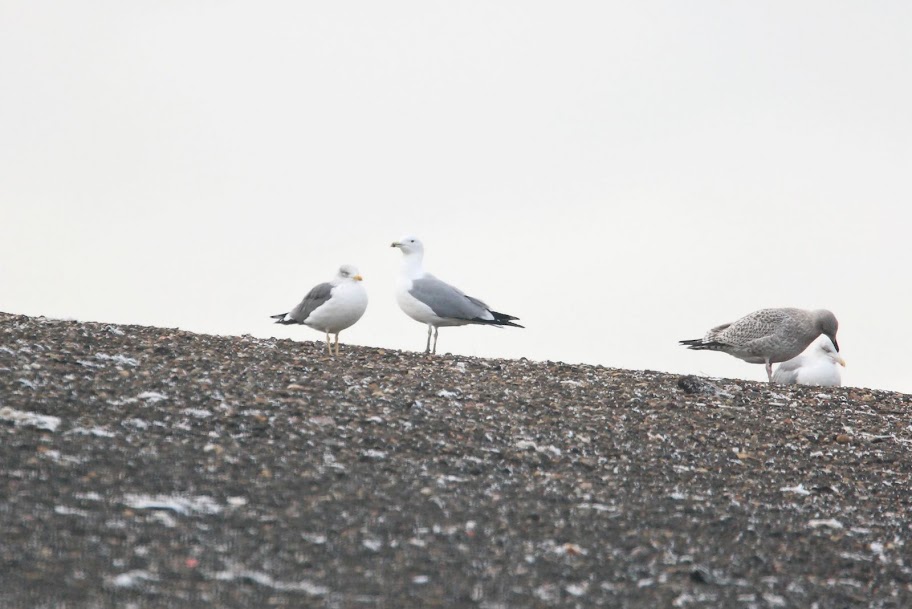 Look at this beauty!

This takes us to earlier this week, and my first proper Gull-watch of the season. I had helpfully bumped into Dom (somewhat of a Gull expert) on the way to Aveley Bay at Rainham, and although I had planned to look for finches, the throng of large white-headed gulls proved too much to resist, especially in the company of someone who could identify them for me. We plonked ourselves on Mount Cachinnans, and started to pick through them. It hadn't been more than about fifteen minutes when my scope lingered on an interesting one. Hmmmm, could it be? Mostly clean white head, good bill length, parallel sided and lemony, a decent head profile and a smallish dark eye. Quick peek at the legs, which seemed long, and were an indistinct colour. I've known Dom long enough to not be afraid of cocking it up, so tentatively called his attention to a what I called a 'candidate' Caspo. Happy to report 8-4, and what's more, though somehow I hadn't noticed, it was colour-ringed.
We carried on going through the mass, and picked up three, possibly four more birds, one of which I again called. 8-5. We saw the colour-ringed bird again a few more times, and eventually I managed to read the ring, so awarded myself a bonus point. Early indications are that it comes from Poland, though if they get back to us and say it's a Lesser Black-backed I'll deduct the two points and add them both to the Gulls. For now though, it's 8-6, and I'm pretty pleased with myself. That said, I almost stuffed it up this afternoon, finding a very interesting* white-headed affair that I initially called as a Caspo but then talked myself out of it, and a good thing too as it probably wasn't one. Phew.
So, Gull season is upon us once more. Happy, happy days.
* yeah right

Posted by Jonathan Lethbridge at 21:03