Look, is this Wanstead Birder blog-thing about Wanstead at all, or just holidays and twitching?

Err, good point. I have to admit that there hasn't been a great deal of patch-working lately. None this week in fact, and possibly none last week either. And the week before that I was in Scotland...

I preferred this, a cock-up, to the in-focus shots

After the thrills of Spring, never knowing what might turn up (basically nothing, but oh the anticipation), the slow summer months tend to dampen my enthusiasm. So tonight Mrs L came home and practically booted me out onto the Flats, which was exactly what I needed. Naturally I enjoyed it immensely. An abundance of small fat green caterpillars were being fed to small Skylarks, small Meadow Pipits, small Reed Buntings and small House Sparrows. Small monochromatic Blue Tits were feasting on them by themselves, and a family group of six Mistle Thrushes were feeding and whirring on the playing fields. Meanwhile loads of Swifts, the odd House Martin and a Swallow performed overhead, a Green Woodpecker yaffled, and two teenagers enjoyed a crafty spliff next to the Coronation Plantation whilst listening to the soothing trills of Skylarks. All very pleasant. 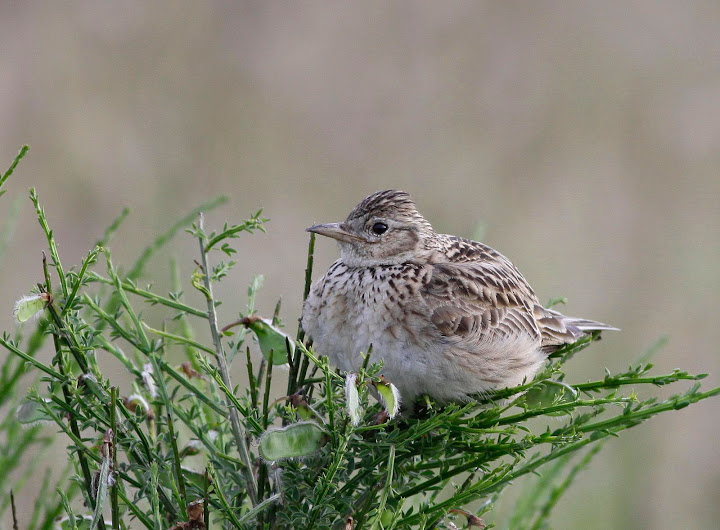 However the tone was lowered slightly by an unusually high concentration of old men hanging around Long Wood. Long Wood is a plantation of mature trees bordered with hawthorn, and is quite dense, dark and shady, but with a suprisingly open understorey. You can't see into it. In fact, given the structure of the wood, I think "loitering" should be used in place of "hanging around". A few of these loiterers disappeared into the wood, with, I suspect, intent. Despite my many hours birding on Wanstead Flats, this congregation is a phenomenon I have never before observed. Like all London patch-watchers, I have encountered detritus, but never before the presumed littering culprits. Perhaps it is unique to late Wednesday evenings in the summer months? I have no idea, but strange men following each other unsubtley into small dark woods and not emerging on the other side is not my idea of patch-watching, so I decided to count the Chiffchaff singing inside on heard-only, and carried on my way. It was no bother though, and in any event I expect that wellies, bins and a camera with neoprene camo don't mark me out as a player. The joys of the patch.

Posted by Jonathan Lethbridge at 20:40