When a Roller was found in Suffolk on Wednesday morning I very nearly dropped everything and just went. I didn't of course, I have a job, responsibilities, and, on that particular day, a wedding anniversary.  Rollers are amazing, divorces less so, and so even once the working day was finished I resisted the urge to head up there. I had the imaginary conversation with myself of course, how it was only an hour away, how I would be back before the special dinner we had planned, how.... Futile, and I knew it! I'd seen one Roller before, a hazy turquoise blob eight years ago. This seemed to be showing spectacularly, and I got to enjoy many many Roller photographs from seemingly every birder in Britain. Oh well.

But it was still there yesterday! Work took rather longer to peter out than I had hoped, but I managed to get away by 7pm and was watching this European gem about an hour later. Insanely good scope views, and at one stage it was perched on wires directly in front of where I was stood. What a brilliant bird, and as it was day two of its stay things were rather more calm and measured than they had been the previous evening. 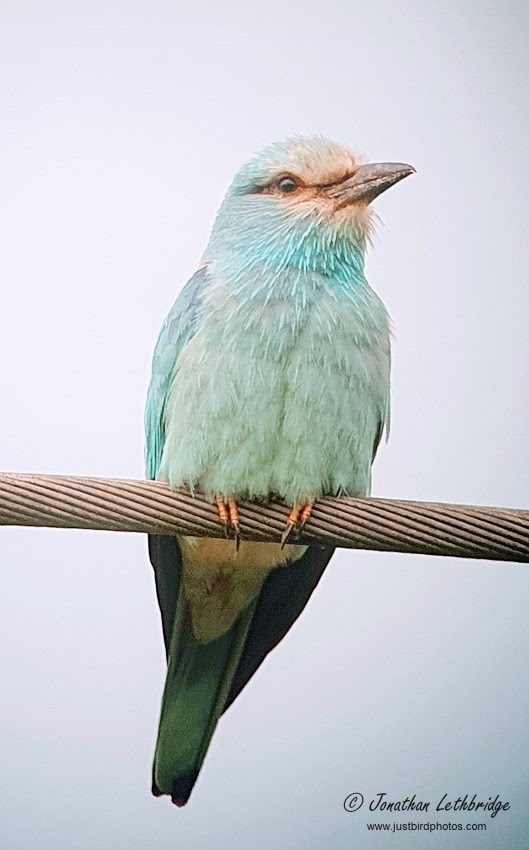 As I was thinking about heading home it occurred to me that the Prof lived nearby, and now that visiting people is allowed and I am so ancient as to have had both jabs, that's what I did. Earlier this year, or last year, I forget, I just had to wave from the street at the Prof and Mrs Prof in their window. Yesterday I got to go in and drink coffee with them. Wow, 3D human company! When the evening was suitably advanced the Prof took me off to a local Nightjar site, a species I have not seen in the UK for nearly seven years. As it turned I still have not seen a Nightjar since 2014, but in between the ludicrously loud barks of Muntjac Deer we did hear two or three birds churring and gurking.

I got back to London gone midnight. Given I am normally tucked up in bed by 9pm if not earlier this was a bit of a shock to the system, particularly as the day before the summer solstice one of our roller blinds (see what I did there?) gave up the ghost and the bedroom is now flooded with light from about 4am onwards. An emergency gaffer tape fix lasted all of two days and although I tried to roll over (ooof!) and go back to sleep I could not and am completely shattered. This will pass, but the memories will remain. A great evening.

Posted by Jonathan Lethbridge at 08:55