I've been to London. Twice. Yes, I know I live in London, but I don't go to London so to speak. I stay here in Wanstead or I bugger off in the opposite direction to London. Seems silly really, a lot of people would give their eye teeth to visit London right now, I am able to swan around it at will yet barely ever do. 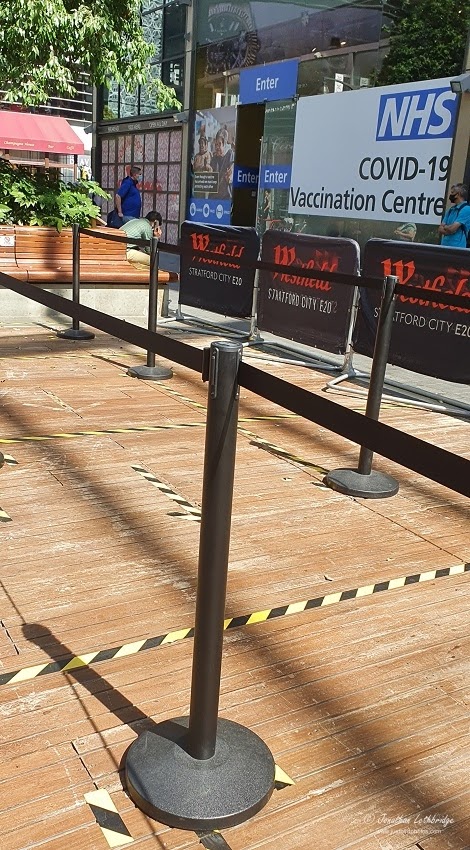 My first trip was less glamourous than that second. I went to Stratford Westfield to get my second COVID vaccination. Usually I avoid shopping centres like the plague, so a small irony that I was visiting one in order to avoid a plague. This was originally scheduled for early July but in an effort to try and dodge the worst of what is looking increasingly like a new wave, all second doses for old people like me have been brought in from 12 to eight weeks. Last Monday I cancelled my July appointment, slightly nervous that I might only get offered slots in August, but I need not have worried and I was able to book it up for 48 hours later. That was Wednesday, so I pedalled off mid morning and got it done. It was an impressive set up and I am massively grateful to the veritable army of volunteers that made it operate like clockwork. I think I interacted with something like nine or ten people. One at the head of the main queue, one at the head of the secondary "Clinic A" queue. Somebody welcomed me at the door and directed me to another person who took my temperature remotely and directed me to a colleague who stopped me briefly before pointing me to an empty chair which had just been disinfected by yet another person. Sitting down, a new man came and asked me questions about my reactions to the first vaccine and gave me little slip of paper indicating I was OK. I was then called by a friendly lady medic who took me to a booth, relieved me of my slip of paper and vaccination card, asked me to confirm my date of birth, and bade me sit down next to another medic. This lady started drawing the dose into a syringe, which was then checked by an ubermedic who had just popped in and asked me if I had a problem with needles. Naturally I said I hated them, but I also promised not to faint and fall over in the corner. A tiny prick later and it was done, the first medic gave me my freshly completed vaccination card, and off I went, passing one more person who was assessing recently jabbed people for signs of looking unwell and sitting them down. I suppose I must have looked pretty chipper as I was waved through into the sunlit uplands and was free to continue my day. A spot of shopping perhaps? It was remarkably busy, I think I was just amazed to see so many people in one place. Most of my forays have been deliberately to people-free zones, but oddly I found myself pleased to see all these perfect strangers.

My second trip was far more fun. Mrs L and went off for a dose of culture, ha ha. As you like it at the Globe on the south bank. Again, many people, but everyone looked happy. Selfie takers outside St Pauls, gaggles of tourists on the wobbly bridge, drinkers on the riverside, and of course the audience themselves. The Globeis an open-air venue, but even so capacity had been reduced by about two thirds and so nobody was sat next to anyone else and we all had to keep masks on. The lover scenes, including the triple marriage at the end, were touchingly touch free, amusingly so in fact, it is a comedy after all. Once again I found myself marveling at how many phrases in common usage today actually originate from the pen of one man writing four hundred years ago. Forever and a day, laid on with a trowel.... We grow up knowing these phrases, using them frequently even, but I bet that almost all of us have no idea where they originate and that we are quoting Shakespeare in our daily lives. With a few exceptions I am pretty much a culture free zone, so it was good to try and absorb a little bit for a change. But most of all I enjoyed being in London, "mixing" with fellow citizens, eating my dinner on the banks of the Thames looking at the city. Afterwards, as we waltzed around the behemoth of St Paul's, I commented to Mrs L that London was actually pretty cool. And it is.
Posted by Jonathan Lethbridge at 18:53