In which I apologise for a flurry of needless year-ticks.

I need to apologise for seeing too many birds. Sorry. I didn't mean to, honest. It kind of just happened. I blogged what seems like only recently about only having seen 121 species. The new number is quite a few more than that, a disappointingly whopping 145. People more tragic than I would be able to tell you exactly what they were on last year at the same point, but obviously I have no idea at all. By the way, on a totally different subject, Muffin's homework over the holidays is to add 49 to 145. Pathetic isn't it? Would have thought the school would have set more for such a long break, but there you go.

Anyway, back to the year-listing that I'm not doing. I took the kids to see a Night Heron in Essex during the week; they needed it for their lists, just like they needed the Woodchat Shrike (which got eaten by a Sparrowhawk by the way). We found the bird no problem, and watched it for about half an hour, taking turns with the scope. During that time, the bird did absolutely nothing, and my childrens' lasting impression of Night Heron will be of a bird sat in a tree with no head. So, a year-tick, but one I think I have successfully argued away, oh, and I might have needed it for Essex as well. Unfortunately we heard both Gropper and Nightingale on the walk back, so two gratuitious and unneccessary ticks to add to the list. 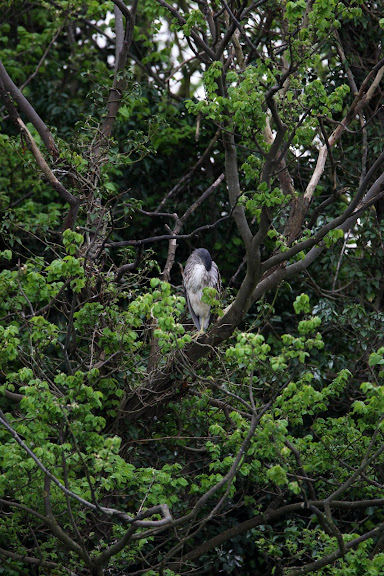 Today, in a break with tradition, I twitched the Black Stork in the New Forest. I have been told several times in the past that the only way to see a Black Stork is to be in its path as it flies down a coast, or to be at a pin-pointed roost site before dawn. This was the latter, so filthy Hawkins and I were on the road at 3am, arriving at the appointed tree at about 5am. Unfortunately we got the wrong tree, and didn't find the right one (and then only with help from Lee Evans who had been there the previous evening) until about two hours after first light. Black Storks apparently get up about ten minutes before first light, so it was no surprise that the tree was empty. Luckily for us the bird was in the plantation right next to the roost site, as once these birds go, they really go, and for a huge bird they are remarkably elusive. Here is an ultra-pro photograph of it in flight. 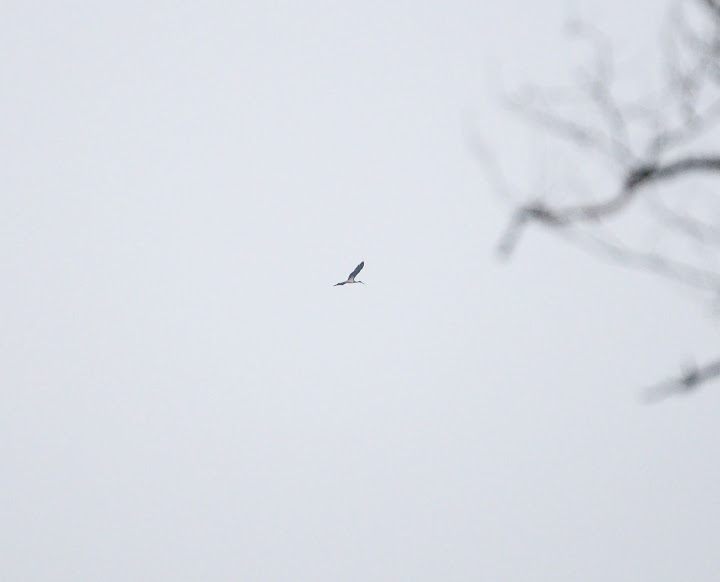 So, all very nice, played for and got and so on, but rather unfortunately the New Forest is rather rich in birdlife, and we were treated to several male Redstarts, Tree Pipits, Woodlarks, Crossbills, Cuckoos and Goshawks over the course of the morning, and as if that were not enough, once back home I found a Lesser Whitethroat. Oops.
Posted by Jonathan Lethbridge at 21:38

Labels: How to Twitch, not year-listing