A body of work

At some point towards the back end of 2021 this blog ticked over two million clicks. I did notice and meant to mark the 'occasion' but other things came up and it slipped my mind. Whilst trying to change the text blurb at the top the other day I came across the stats page and saw that this now read two million and fifty thousand. Fifty thousand? Really? If I am lucky the average blog post will get something between 100 and 300 reads. Or between 100 and 300 arrivals at least, many people will quickly realise they have a mistake.... In January I somehow bashed out 16 posts - it is not uncommon that I start the year with a surge and then decline. So 16 posts at an average of 200 suggests that the total clicks should have advanced by a little over 3,000. So where on earth does 55,000 come from?

Taking the last 24 hours as an example, 60-odd people read the most recent blog post. A further 300 read something else. Going back a further 24 hours to the start of February there are now another 450 visitors and no other recent blog posts. What on earth are they reading? Well, digging a little deeper (or as far as you can get within the innards of Blogger), it suggests that the vast majority of visitors are in fact reading stuff I wrote ages ago. And I mean ages ago. There is only so much information I can gather, but here is a snapshot of the last seven days. 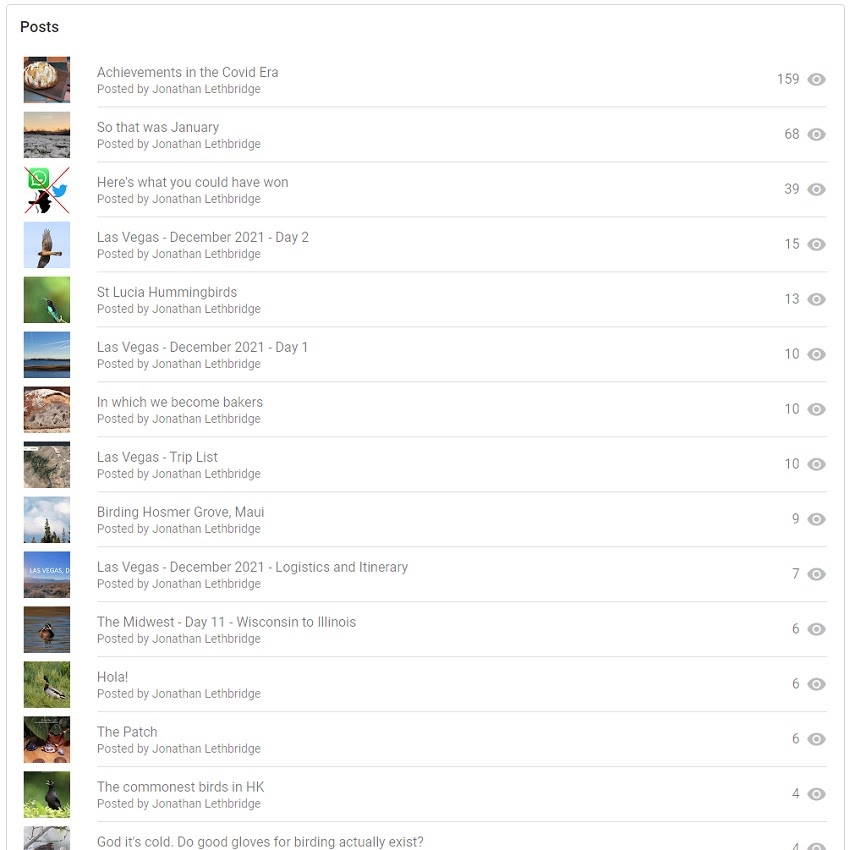 No surprise that the most recent posts are at the top of the list, followed by those from last month, but what is St Lucia doing in there? That was 2013. A random post with a photo of a Mallard is from 2010. A bit further down there is something I wrote in 2009 about needing a better pair of gloves. The data runs out below three clicks, but I suspect that there are probably a large number of similarly ancient posts that perhaps get one or two a week. And then you get onto "Pages" - these are things that sit in that bar at the top, where I keep my various lists, a map of the patch and so on. Within the last week eight people have looked up my 2019 patch list. Or one very forgetful person. Five people looked at my garden list! How niche is that?! If these stats were not available I would have come up with the opposite answer, a gradual downwards trend. In general blogs are somewhat passé, people today favour a shorter web experience measured in characters and seconds. Certainly the number of writers that I follow keeps declining - that list on the right hand side of blogs I visit has several people who have not posted for over a year, and every now and again I go through the list and perform a sad cull. My own output is also a shadow of its former self. I post far less these days and consider what I do post to be far less interesting that it used to be. I reckon I hit my stride in about 2010 when I was a house husband and have been on the wane ever since!

The answer is volume. This has been going for over ten years and there are now over 2,000 posts. They are probably all indexed in some way by Google and other search engines, and thus entirely innocent internet enquiries send people my way. And with so many posts on what is actually a more wide-ranging subject matter than just birds, this must happen on quite a regular basis. I suspect I could stop posting altogether and it would still keep going up.

I will leave you with one final stat that I think proves what is happening. In 2021 I scraped together just 106 posts, 5% of the grand total. It was hard work and had I not managed to eke out a dozen posts from my trip to the Midwest it would have been my lowest output ever. However the total site visits in 2021 equated to 21% of the historic total. I reckon I can sit back and relax!

Posted by Jonathan Lethbridge at 07:57