Another installment of the book club I'm afraid, covering all the things I've read since the last time I posted. It's a surprising amount actually, I guess I just really like reading, and it makes my commute to work and other travel I undertake pass that much more quickly. On a recent journey I went on I'd finished the one book I had taken with me by the end of the first flight and had to swing by a bookshop and stock up. It is rare I even switch on the fancy entertainment systems on a plane these days - maybe at a push the moving map, but I'm perfectly content just reading and listening to music. Ensure a regular supply of gin and tonic and I am an extremely fuss-free traveller. It has to be real book by the way, made of paper and so on. A bit old fashioned these days but I doubt I would read half as much if the sole option were a Kindle or whatever.

So, what have been perusing? 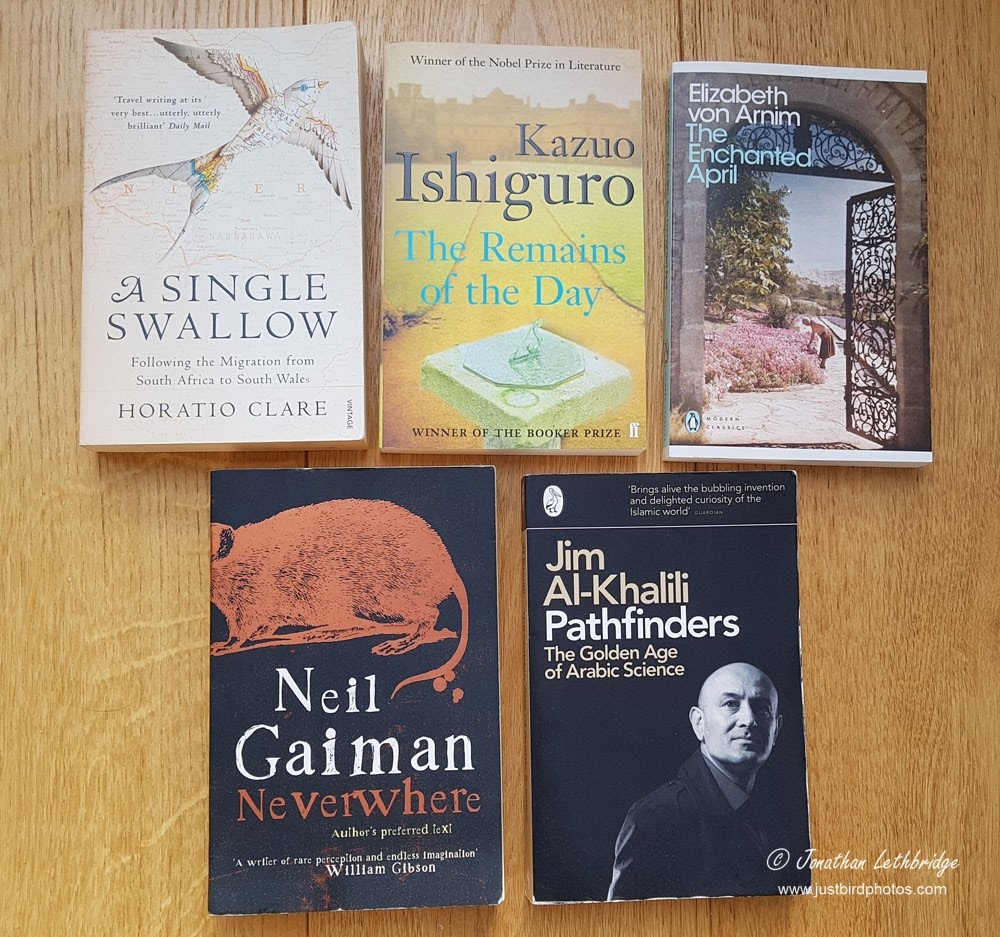 A Single Swallow - Horatio Clare
You might think this is about birds, and in a way it is, but actually that's just a pretext. The author leaves a life of material possessions behind and attempts to follow the northbound migration of the Barn Swallow from South Africa to the UK. So it becomes an overland journey through Africa with a passing nod to Swallows from time to time, and is mostly about the people he meets, the physical travel and landscape involved, and how the journey changes him. And this is of course what makes the book. I'm fascinated by the continent, yet have only visited the very top and the very bottom. Horatio Clare does too, indeed he starts off at somewhere I've been birding. I enjoyed it a great deal, though it is not in the same league as Dark Star Safari by Paul Theroux, which is the same journey north to south.

The Remains of the Day - Kazuo Ishiguro
This was one of those moments where you're working your way along a shelf of books with your head cocked awkwardly and the title jumps out at you and your inner voice says "Oh, wasn't that a film?", and reached out for it. Like me, most people will know or know of the film starring Anthony Hopkins, and so as I'd never watched it I gave it a try. And it was rather good, without being exceptional like some books I've read recently. Despite it being a novel in which not a great deal happens, it is just very well written as a character portrait. A butler in a once great english country house relives past glories of professionalism, loyalty and dignity, but at what cost did they come?

The Enchanted April - Elizabeth von Arnim
This was a real left field choice, picked up in hurry whilst trying not to miss a flight, but it proved to be one of the very best things I've read recently. At first glance a 1920s novel about four unacquainted and very different ladies who leave their lives behind and together rent a castle in Italy for month was not exactly something I would normally reach out for, but somehow it sounded, well, enchanting. And it was, in fact it was completely wonderful. The writing is superb, the comedy understated, the characters expertly formed, and the eye for human frailty, small-mindedness and various other personality traits fantastic. Like the book above, the storyline is quite banale and simply to do with happiness, but that doesn't matter in the slightest and it is quite charming. Pick it up, and like Mrs Wilkins, Mrs Arbuthnot, Lady Caroline and Mrs Fisher, let the sun and the Italian riviera work its magic.

Neverwhere - Neil Gaiman
This was another loan from a friend of mine, very different to anything I might normally read. London Below is a parallel city inhabited by the magical and the occult. You cannot exist both in London Above and London Below, and one evening Richard accidently crosses from one to the other losing his identity in the process. Expect many plays on words, for instance there is genuinely an Angel called Islington, an Earl holds court, and there some Black Friars and old man called Bailey. See what I mean? Richard is taken on a whirlwind tour of this alternative and scary London by the Lady Door, hunted by ruthless assassins. Hard to put down, but ultimately not a book I can rave about for some reason. Nothing wrong with it, just not really my kind of book.

Pathfinders, The Golden Age of Arabic Science - Jim Al-Khalili
This was hard work but rewarding. I learnt heaps about heaps, and not just about the scholars, philosophers, scientists and polymaths of 9th century Baghdad. If you thought you knew about "modern" science, think again. Copernicus, Kepler and Newton and the like might be the ones we know in the west, but Arabic scientists had established the circumference of the world to within a percent of the actual distance by the 11th century, and much of the work of the court of the Abbasid Caliphs laid the foundation for much of what is known today. Algebra, Algorithm....just think for a moment where those words might have come from. I am completely hopeless at science and [real] maths, and I know far less than a middle-aged man ought to know about the laws of the universe, so this was a massive eye-opener in basic terms as well as for the historical story Jim Al-Khalili tells. If you have not heard of the enlightened Caliph Al Mamun and the House of Wisdom, well, you have a lot to learn. Fascinating.
Posted by Jonathan Lethbridge at 18:30