Although adding new birds to lists isn’t much of a pressing concern these days, I had at least given the Elegant Tern buzzing around the south coast a little bit of thought. No much, but I did briefly consider going before deciding I couldn’t be bothered. Big lines of people in a crowd, “meh”. So much for twitching. It’s an incredibly rare bird this far east of its home waters , but thus far I find that it isn’t really gnawing away at me very much. I must be nearly cured. Thankfully now I don’t even need to go at all, and this is all thanks to power of the internet. Yesterday the bird strayed away from Church Norton where it has been spending most of its time and wound up on Brownsea Island near Poole in Dorset. Somewhat staggeringly, of all the places it could have chosen to land it plonked itself down right in front of the National Trust Tern colony webcam. This fact was broadcast on Twitter, which I viewed very much in the same light as “lift offered” when it comes to rare birds. Seeing as it was just a click rather than spending an age in a car with a complete stranger I gave it a whirl.

Nothing. Presumably most birders in the UK were doing exactly the same thing and the website simply didn’t have the bandwidth.

Later that evening I was sat in the garden mothing. Still early and with not a lot of activity I idly fired up the webpage again. Although dark it appeared to have an infrared mode…

The Elegant Tern was roosting in the centre of the screen. I couldn’t see its bill, but the punk hairdo and ring on one leg were huge giveaways amongst the Sarnies. I watched entranced and after a little while it woke up and had a look around. Will you look at the bill on that! 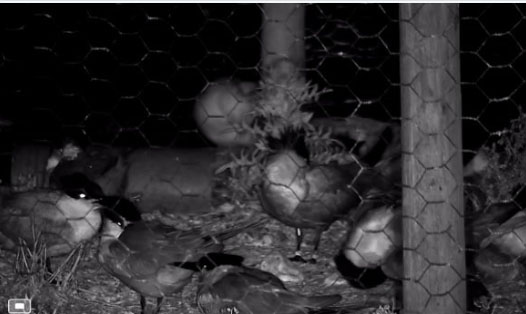 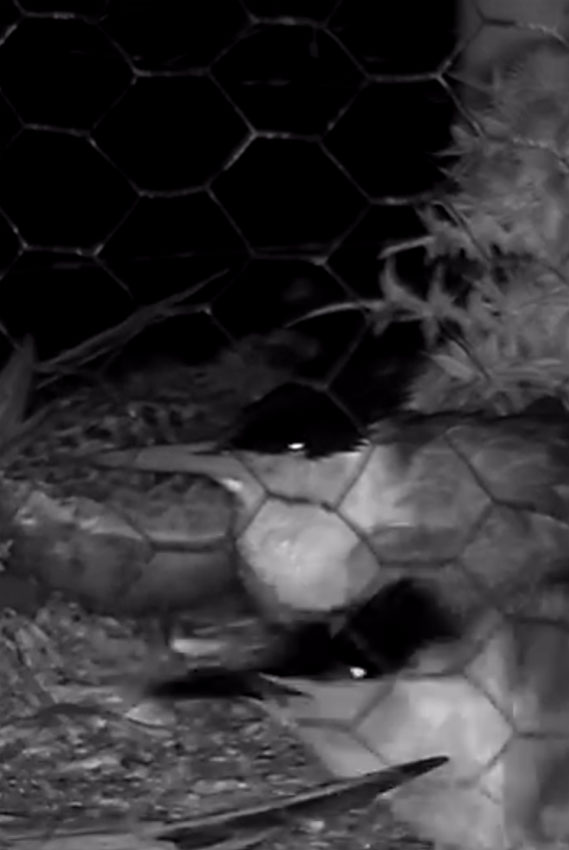 Tick and run! Or rather tick and stay sitting at home.

What do you mean that doesn’t count as a tick? Of course it does! Travel to the site and look at the bird through some glass. Remotely look at the bird also through some glass. I mean the only difference is really the magnification, physically I am doing exactly the same thing, looking at a rare bird through some optical equipment. And with a far better carbon footprint I might add – eco-twitching if you will. I watched the bird for some minutes, getting absolutely excellent if monochromatic views as it craned its head skywards as the Sandwich Terns engaged in some late night squabbling. I honestly could not have asked for a better rare bird experience.

OK, so in all seriousness it does seem a little bit wrong to tick the bird, however technology is advancing steadily and we cannot ignore it. It’s like video-conferencing – back in the day all meetings were face to face and people travelled to meet each other at vast expense. These days however we all save ourselves the time, money and effort and simply sit in offices interacting in almost exactly the same way as we would have done in a single room. So cast your minds back to the White-throated Robin twitch in Hartlepool, the one which famously (or infamously) involved ladders and all sorts of shenanigans. A passing white van was also requisitioned and had its roof caved in as I recall. Scenes. But what if someone sensible had turned up with a long selfie stick and simply poked it over the wall? The crowd could have looked at the phone screen, live, and had perfect views of a bird that was only a few feet away and without recourse to the mayhem that in fact ensued, and which reinforced yet again what a bunch of misfits UK birders are. And you don’t need to see a bird with your own eyes, after all the concept of ‘heard only’ has been around forever and a day. If you have no doubt about what you have heard, many people call that unequivocal, as good as seeing it.

Taking the technology piece a bit further, what if somebody had had a drone and hovered it fifty feet above the garden? The only differentiating factor between the selfie sick, that, and viewing a webcam then becomes the distance involved. You’re either physically quite close to it but separated by a physical barrier or you’re a further away. And if the only barrier to ticking a bird is simply a test of whether you have the time and inclination to drive a vast distance quickly, well…. Oh hang on.
Posted by Jonathan Lethbridge at 21:42

Labels: How to Twitch, Tick and run