I just returned from Iceland, a glorious trip in which I suffered severe sleep deprivation in the pursuit of birds. I ended up pressing my shutter 4,114 times over the course of the weekend which is pretty obscene. Last night when I got home I downloaded all of these, and before I passed out I quickly processed a few of them that I remembered taking. I tweeted them out, including one as I thought it was actually quite good and had a little bit of a “wow” factor to it. Showing off in other words. I don’t do it often, or at least not any more as I barely get to use my camera. Then I had the most amazing sleep I can’t remember.

Turns out that I was right, it does have that little something extra about it, and as far as I am aware it has gathered more attention than any other photo I have put up. I say as far as I am aware because I have only just now discovered a function of Twitter that shows you how many times any banal tweet you sling out has been seen by other people. Stats in other words – a little bar called “view tweet activity” on my mobile phone, or a little graph symbol online. Has anyone ever used this? I had no idea that this was even possible and I am staggered that the IT systems that sit behind Twitter can even do this at all. Now I don’t know that I can call this viral exactly, but as I write this the photo has been seen by nearly 16,000 people in the last 24 hours. I say seen, but this is where the stats become interesting, and where the true vacuity of Twitter becomes apparent. He actual stat is called “Impressions” and apparently means how many times a tweet has been viewed on Twitter – you can actually see this number ticking up as you look at it, so you know that somebody somewhere just wiggled their finger and….scrolled right past it!

The reason I say that is that there is another stat called “Total Engagements”, which I think means how many times somebody didn’t scroll right past but actually paused and clicked on it. That number is 1,598, so about 10%. Nine out of ten cats….. Then we have something called  “Media engagements”, which is how many times somebody actually clicked on the photo, i.e. to make it bigger. This is where it gets interesting. 953.  So 60% of the people that lingered also wanted to see more. Of those, 319, so about a third, felt they had the time to hit the little “like” button. This takes all of about a nano-second, I know this as I’ve done it myself many times with little to no thought whatsoever. Until now I had no idea what it actually meant, but now of course I realise it is directly connected to inner glow and happiness. 55 people went the extra step of retweeting it, the Twitter equivalent of forwarding an email, so about a sixth of those who had “liked” it if of course it is a subset which it may not be. I don’t know and I am not interested enough to find out. And anyway, it would not fit with my journey of diminishing returns that is the whole point of this post.

Continuing with which, 37 people decided they were interested in who took the photo and would look at my profile, the one which says I am a dedicated patch birder hem hem. I have received no proposals of marriage and my acolyte count has risen by approximately four, and here we are getting to the nub of it I think. There have been six replies. Six. A mere six people could be bothered to actually type anything, and one of those was a German guy who I think missed what was supposed to be an expression of favourable fortune and extreme jamminess when I said "Not quite sure how this happened, but I'll take it" and told me that the reason was the bird's feathers had lost their hydrophobicness. I thank them for it of course, especially Kurt, but as a demonstration of the here today gone tomorrow uselessness of social media I think this is an excellent case study. 0.0375% of people who saw the photo actually said anything about it. To put that another way, for every one person that did type something, 2,665 did not!! It is therefore fortunate that I do not rely on bird photography (or Twitter!) for a living, as the amount of money I have earned from this photo rounds to exactly £0.00. In fact it cost me money to even take it, not only because my shutter is now one frame closer to stopping working, but also because surviving on anything other than bread and water in Iceland requires that one practically be a billionaire.

Here are those numbers again.


Because a picture is better than a thousand words, I also put it on a graph. 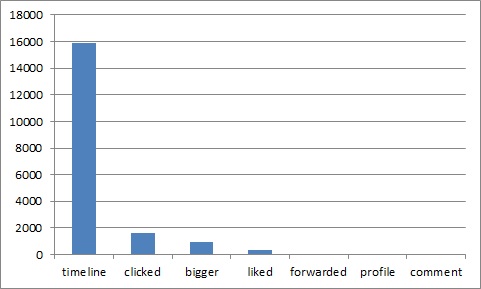 Oh, and because we have come this far, here's the actual photo...

Posted by Jonathan Lethbridge at 21:10