You will have to excuse the title, the reasons for which will become clear as I continue. I am in Austria, taking a break from relentlessly birding Wanstead. I deserve it. My contribution to the status of the patch list is beyond reproach. Or it was in about 2014. Ok, 2013. Anyway, it is the first time I have properly visited Austria, a short autobahn hop from Germany to Italy over a decade ago does not really count, and I am enjoying it immensely. There are two main reasons for this – cake and beer. Cake and coffee are traditional, but away from work I am not a huge coffee drinker so I have been largely substituting.

Cake is something of a Viennese institution, and the multitude of konditorei are living proof that this proud heritage is in rude health. Kaffee und kuchen for the five of us was generally around twenty quid a pop – this is broadly equivalent to what a “meal” in a fast food place would cost, and some way below what coffee and bite to eat would set us back in, say, Canary Wharf, so we have been making sure to stock up as frequently as our stomachs will allow. At least once per day. The Viennese understand cake, and crucially they understand size. There is none of this namby-pamby amuse-bouche going on, which whilst delicious leaves you wanting. Instead you have immense slabs of utterly exquisite and beautiful sugary goodness which are so vast that about two thirds of the way through you secretly hope you will discover a caterpillar nestled away and push the plate away in disgust. Oh sorry that’s fruit, my mistake. With no such relief possible you plough on through, wondering if the children will let you skip dinner and just go to sleep at 4pm.

Beyond the cake we have had a wonderful time. We started off in Budapest having decided that a bit of culture should replace the traditional summer beach holiday, and after a day and a half of exploring Hungary’s capital city took the train to Vienna. As I explained in my last post I am a very cultured individual, and I hope to ensure my children gain this same sense of wonder and enchantment that travel frequently brings. With this firmly in mind we booked a day trip to the town of Melk, famous for its incredible Abbey and collection of manuscripts. And flying bishop’s hats.

We hadn’t actually intended to visit the Abbey at all, but by some miracle we managed to curtail the normal breakfast buffet extravaganza and catch the earlier of the two trains we had in mind. This left us with nearly two hours to kill before our scenic boat trip down the Danube to Krems, and seeing as the kombitikett got us in we thought we might as well. Amazingly we had the place more or less to ourselves having arrived a few minutes before the first coach trips, and thus were a crucial few minutes before everyone else. This allowed us time for careful study of the exhibits in the museum section that started off the visit, which unsurprisingly was devoted to religion, and which regular readers will know is one of my very favourite topics. Kicking off the displays was a Madonna and child, fantastic…

The Abbey is Benedictine, although I enjoy all religions equally. Especially those that charge for entrance. And boy do they need to. The amount of opulence of display was quite incredible. Sickeningly so actually, I have never seen more gold gilt in any setting anywhere. Piety seemed somewhat absent, and I was left with the distinct impression that this particular branch of religion was more about the glorification of priests than the worship of any deity. Clearly I am tinged with scepticism in this field, but the bishop gear on show would not have been out of place in Tutankhamun’s tomb. Robes, gloves, bejewelled slippers, and staves and cups so glittering they could have been props from Indiana Jones. All of these exceeded however by the flying mitre, displayed nattily seven feet above the floor in a suspended glass case, with DANGLY BITS extended as if the hat were flying. I was so in awe I forgot to take a photo and as a family we all enjoyed this very much, imagining the levitating bishop of yesteryear gliding serenely to his gold-cushioned altar to preach humility to the unwashed masses.


We had of course come to admire the world-famous collection of manuscripts, not to poke fun at the excesses of the eighteenth century. These were housed in a magnificent library adjacent to the chapel that looked every inch the real deal, with endless wooden bookcases, spiral staircases, rolling ladders and ancient tomes floor to ceiling. We spent all of two seconds looking at the manuscripts, as none of them appeared to be on view and the room was manned by two fierce-looking guardians, there to ensure you didn’t attempt to actually touch anything (which is fair enough really, some people just have no sense of history), and proceeded to the chapel. If we had thought that some of the finery on show earlier was OTT, this place was dazzling. You didn’t need lights (although these came on automatically just as the automatic door closed behind you - no expense spared), the church was aglow. In all honestly I could not say it was beautiful, it was too gaudy for that. But it was highly impressive, which is no doubt exactly what it was intended to be. I don’t know much about history, but I am led to believe that living conditions for the vast majority of the population in medieval Europe were pretty execrable. Not so for priests and monks it seems, who although simple people in the service of God appeared to have vast wealth with which to gratuitously cover all surfaces with gold leaf, tapestries, silks and so forth. But they did brew decent ale so hats off to them I suppose. Gilded flying hats with streamers.

Notwithstanding the fabulous terrace with views over the Wachau Valley, the highlight of the Abbey were the toilets immediately after the gift shop (all Abbeys worth their salt have gift shops). After several coffees earlier in the day (no trappist ale as yet) I was severely in need and it was with great relief that I entered into some spotless facilities. And it was with no small amount of delight that I registered that the brand of toilet roll dispenser was “Big Willy”. It is the smaller things in life which for me really make the difference. You can take all the glittering frescos you like, all the medieval books and candelabras, all the stained glass and gem-encrusted paraphernalia in the world and I am still going to be more pleased with a puerile piece of anodized aluminium. My children, bless them, expressed similar delight. 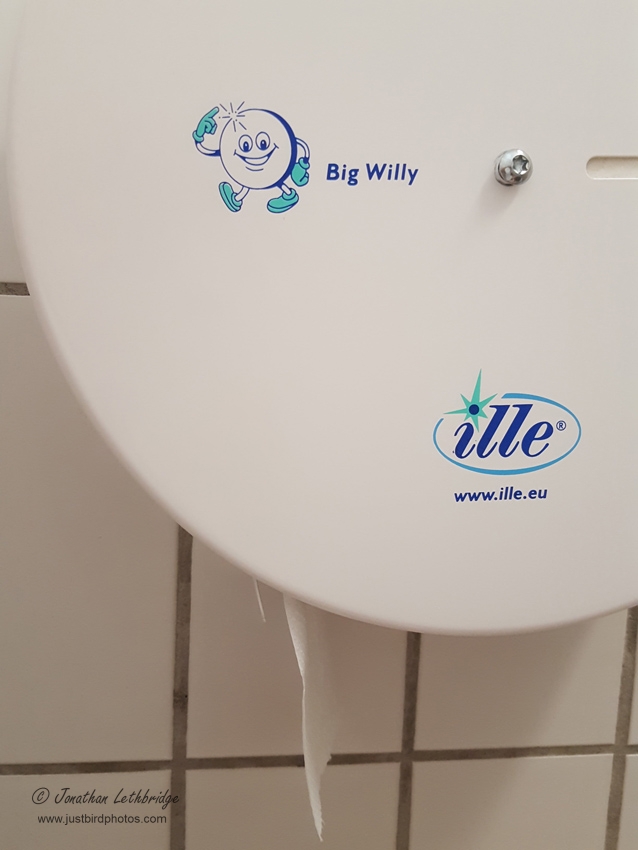 It got better though, albeit you suspect with less innocence. After we had walked around the Abbey gardens and descended back into the town in order to catch our boat, we walked past a sign advertising Rabbit Shit. No really, I took a photo. Per the sign this meant chocolate pearls, but still, would you really call it that in the hope that people would pop in? A little further on a sign felt the need to translate Apfelstrudel into apple strudel. I am not sure exactly what kind of person would stare hard at the word Apfelstrudel and come away none the wiser, but nonetheless it capped off an excellent morning, and we headed to the boat with a spring in our steps. 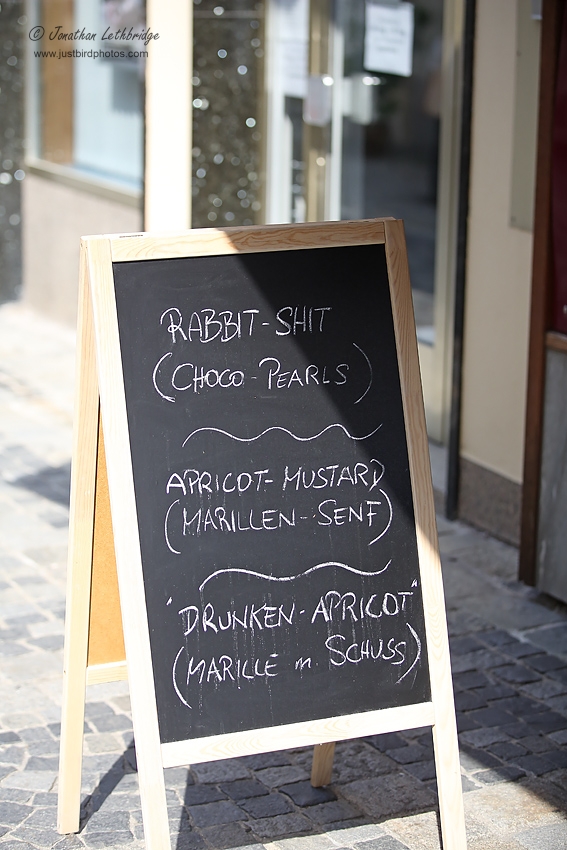 Posted by Jonathan Lethbridge at 22:54