Birding spots from the air

I wrote the following this morning on my way to work. Not your average commute, but a whole lot more interesting than the 308.... It was a lovely day for flying, and this is how I wrote it. I intended to expand it, turning the rough notes and memory joggers into actual sentences. Reading it again, I've decided it works as is, growing as I get into it.

Wanstead Flats
My house!
The Lea Valley, Fisher's Green and Bitterns. There was a Savi's there too.
Tracing the M11
Welney, imagine the Swans
The Wash - waders
Norfolk coast - Geese, Hunstanton – Fulmars
Gib Point, twitched that for Subalp
Wait, that thin bit must be Spurn!
Humber estuary, can just make out the bridge. Spurn has been good to me when I've been bothered. I can see the last 45 minutes, still no idea why it takes so long!
And that bulge has to be Flamborough.
Somewhere between the two I dipped a Roller!
Snow! The North Yorkshire moors, all it takes is a bit of high ground. Picking out the Red Grouse, drove over them on the way to the Black-throated Thrush.
What's next as we track along the coast?
Inland, more tracelines of snow. Is it the Pennines? Maybe not. Long thin lakes, perhaps it's the Lake District? Difficult to say how far west we are, view out of the port window is only clouds, no hint of a coastline.
Here my geography starts to get a little sketchy, nonethless a very hilly landscape.
Looking ahead you see where the Lothian coast starts to come in along the Firth.
We're definitely further west now, it must be Northumberland but it's a lot further away.
There's more snow too, up towards Coldstream I would guess. We're not over Scotland yet but it can't be long.
I hear the engines throttle back, a noticable decline. We'll start heading down now, in towards Glasgow. The Solway must be on my left, with yet more Geese. In fact the SFO just came on, we're just south of Carlisle.
Now I can see the tip of the East Neuk of Fife. Crail and out to Fife Ness. Way off, but no doubt about it. I've sea-watched from there. Fantastic pale-phase Arctic Skuas in close, and tons of Manxies. And hugging the nearer coast is the Bass Rock. I don't know whether the Gannets are there, I expect not at this time of year, but even now the white that they have left behind is resolvable and in my mind I can hear them.
For some reason I can't pick out the Isle of May, but I know it's there. Steely is in for a disappointment if it isn't!
But I can now see around Fife, into the Tay. Carry on around and you head up past the Yellowlegs and to Aberdeen. Too far to see that but I know that's there too. And beyond the Firth of Tay, further north, are some real hills. We're tracking in west now, and more and more are becoming visible.
Now I can see the Forth Road Bridge, or maybe the towers of its replacement. Scanning east again I can see what must be the towers at Methil. My parents are near there. There are a couple large hills, the Lomonds they're called, East and West.
Scanning, searching, I think I see them. Certainly the western one, as there's Loch Leven. It has an island in the middle, I know it well – another favourite birding spot. Yes, that must be it, a steep escarpment.


We're lower now. That's definitely the new bridge as I can see them both now. And the iconic rail bridge, the cantilever structure, easily visible. And below it, the runway at Edinburgh airport. I'm headed for Glasgow though - ten minutes to go. Time for me to go too, seat back up, tables away. 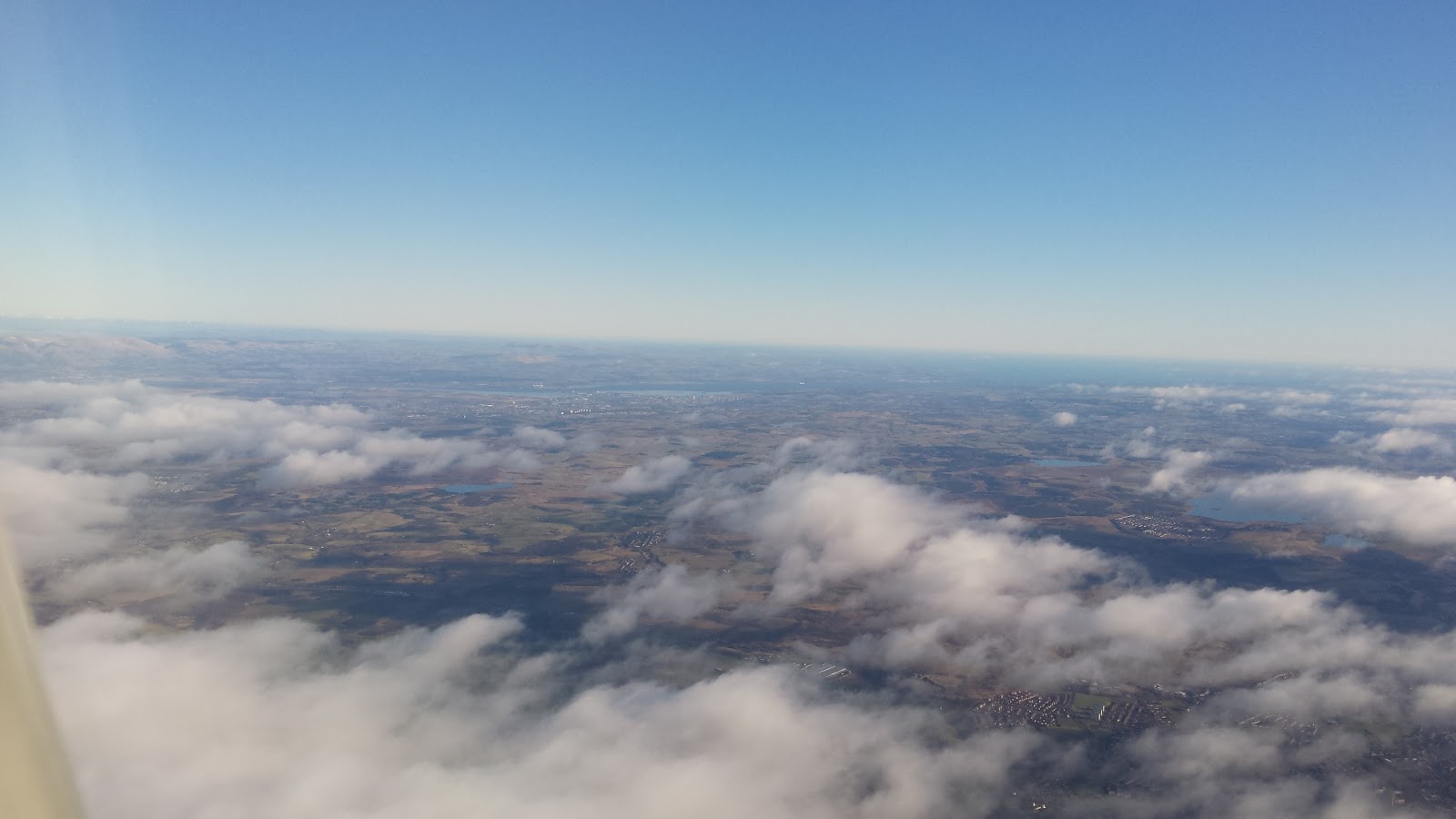 Posted by Jonathan Lethbridge at 22:06