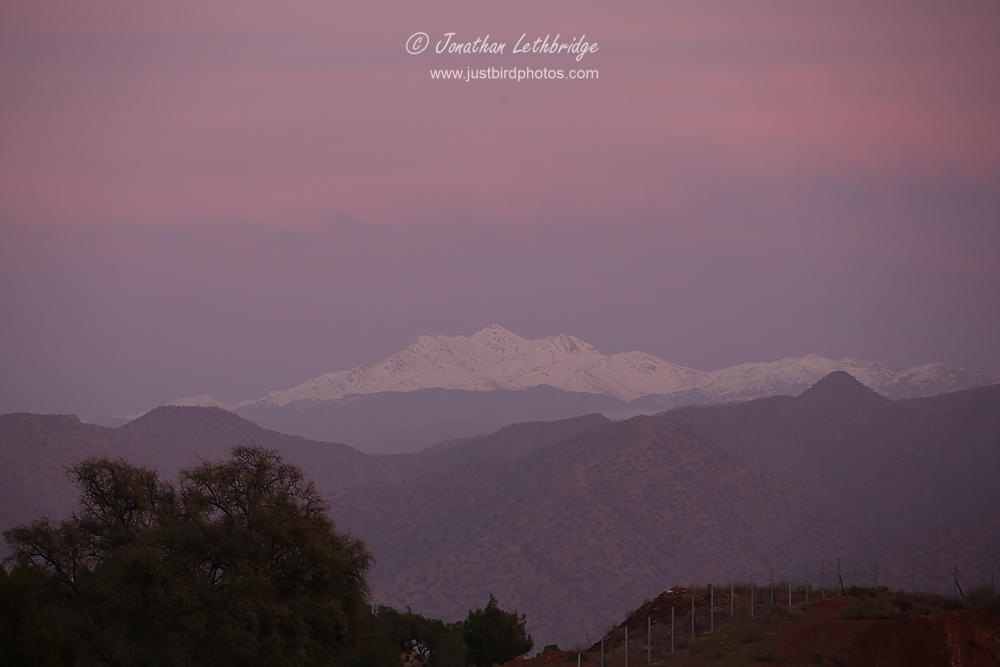 Logistics
·        A two day trip in early December (6th – 8th) booked in a fit of enthusiasm during a British Airways flight sale. No particular targets, just an expectation to pootle around and point the camera at stuff, much like my trip back in January.Two up, with Andrew M for the first time.
·        BA flight to Marrakech (RAK) from Gatwick departed 1250h on Saturday morning, arriving at around 1630h. At the time of booking this had been an early morning departure arriving at lunchtime, but this flight was axed from the schedule a few months later. I could have cancelled, but decided not to. Nonetheless it shortened the holiday by half a day, so I shall in future be looking at other airlines for this route.
·        Car hire via Avis was a clapped out Peugeot 206 that took a full 90 minutes to claim, an hour to give back, and came with zero petrol in it. I cannot remember a shittier car hire experience. Last time I used a local company, Medloc, and having now experienced the lackadaisical competition I will use them again. £94 and the doors didn't even close properly.
·        No accommodation booked in advance, but I had two places in mind. The first was the Camping Sidi Wassay just north of Massa on the south side of the river, used back in Feb, where a small hobbit dwelling set us back approx £18, and then the Coq Hardi in Ait Ourir for the second night, which was £16 each including breakfast. We arrived at unannounced at 2330h and 2200h respectively, and had no trouble sorting out rooms at either place.
·        Research was unnecessary, as I'd been to all the places before, but I would have done well to read the news before leaving, as had I done so I would have learned about the incredible rain and subsequent flooding in southern Morocco, and may have changed the itinerary. The Massa and many other places have been devastated by floodwaters surging down from the mountains, and whilst we were still able to pursue the original plan, it was nowhere near as easy. A number of roads that I had planned to drive, both in the Massa and the Atlas foothills, had had bridges washed away and were thus impassable.
·        Ate mostly oranges and drank mostly water - an exceedingly cheap survival strategy! In fact the whole trip was stupidly cheap, spending under £100 each which included all accommodation, all food, petrol and motorway tolls. No police bribes for 'speeding' were necessary this time, but I was being particularly paranoid. 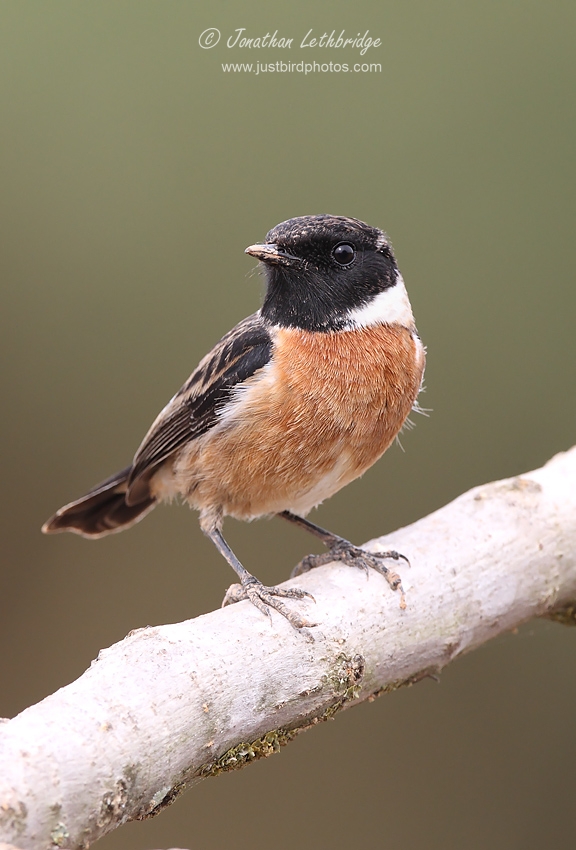 Day 1: Flight arrived at 1630h, and then wasted over an hour faffing with Avis thus missing all daylight. Missed the quick route out of Marrakech and arrived in the Massa just after 2300h.
Day 2: Birded the Oued Massa all morning, explored the Oued Souss in the afternoon, and then drove to Ait Ourir in the dark.
Day 3: Drove the backroads looking for photographic opportunities until about 1430h, when we headed for Menara airport and home. 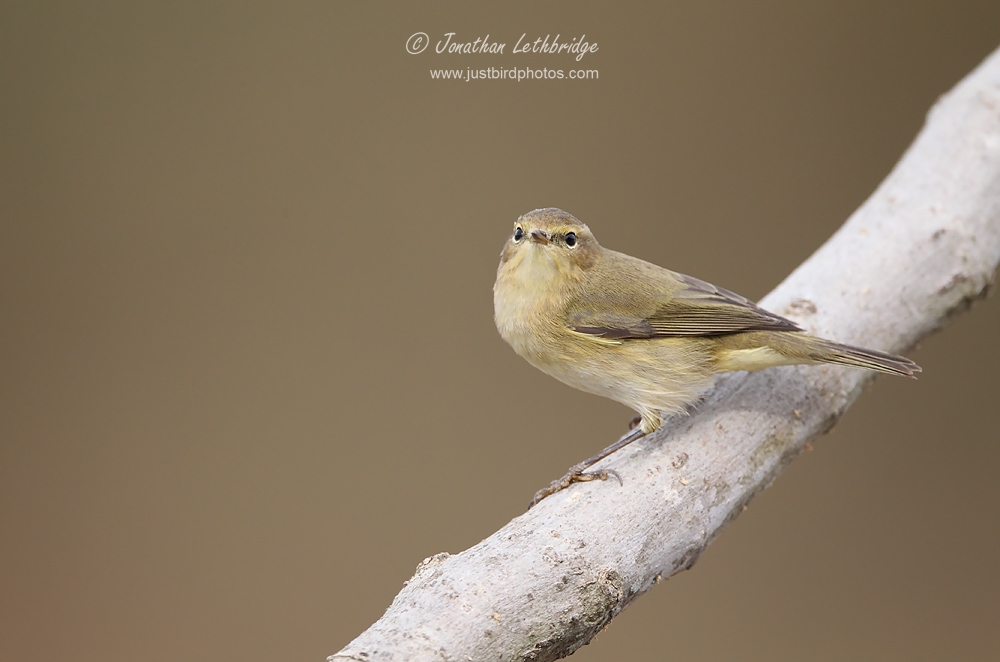 Day 1
By the time we had managed to get a car off the cretins at Avis it was dark, and so all that remained was to drive to our destination in the Oued Massa. This took far longer than anticipated, and even in the dark it was clear that the heavy rains must have taken their toll. At the Sidi Wassay camping we sourced a dank hobbit cabana thing that had clearly soaked up a great deal of moisture, but were so shattered that it made no difference. 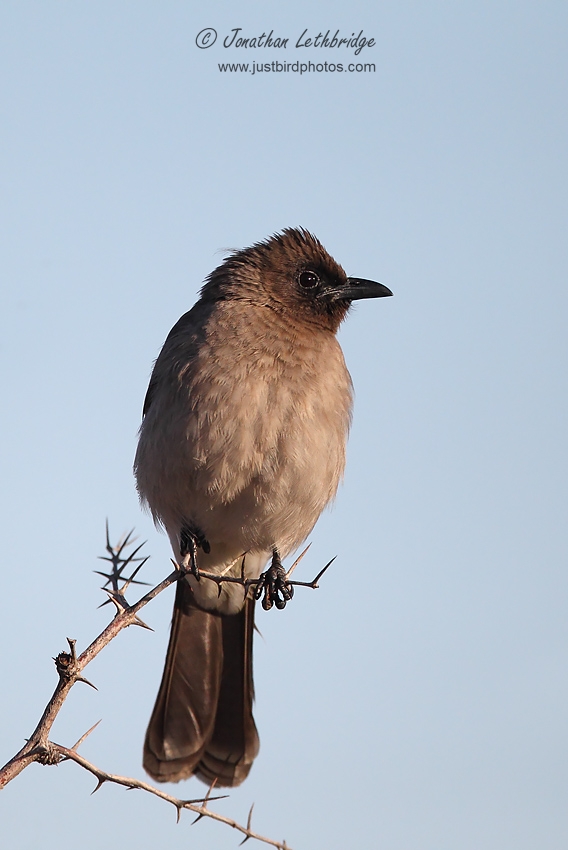 Day 2
A fine day by the looks of it, with Linnet flying round the campsite and a Moussier's Redstart perched on a German campervan's wing mirror. Up and out quite quickly we tried some of the same fields as last time for Bald Ibis, but drew a blank and instead were diverted by numerous Thekla Larks feeding nearby. As we crested the hill, the sight of the Massa drew our breath away - devastated, the delicate system of drainage and irrigation overwhelmed and destroyed. Birds a plenty, but penetrating into the maze of small fields proved practically impossible. At one point we had to jump what had been a path but was now a stream, and balance along the top of some of the remaining dykes to pick our way back to dry land. A Bluethroat was a pleasing find, though rather skulky - nothing that Photoshop cannot sort out though..... Other than that the usual denizens were present a correct in the post-diluvian morass - Bulbuls chattering away, Tchagras fluting, and numerous Stonechats and Sardinian Warblers, including some very obliging birds that made our struggle with floodwaters very worthwhile. We whiled away most of the day here before trying out the Oued Souss a little further north. This was nowhere near as good, but we were operating on no gen whatsoever, whereas the Massa was known quite well, despite its watery reshaping. With the light fading we skirted Agadir and crossed over the western part of the Atlas and back to Marrakech, getting hopelessly lost in the city before popping out of the other side and onto the road to Oukaimaden. It took until the road started to climb into the mountains for me to realise we had wanted the road to Ouzarzate, but this was easily corrected and we pulled into the Coq Hardi in Ait Ourir at around half ten. Whilst the previous night we had fallen asleep to the sound of the Atlantic, here we had the raging Oued Zatt, still in full flow a week after the rains. 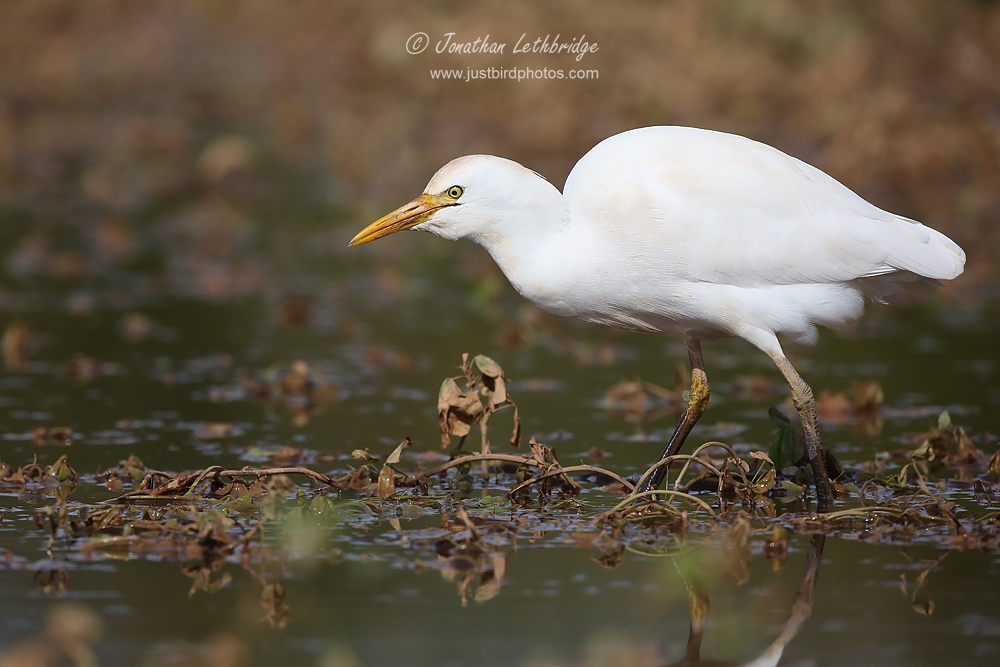 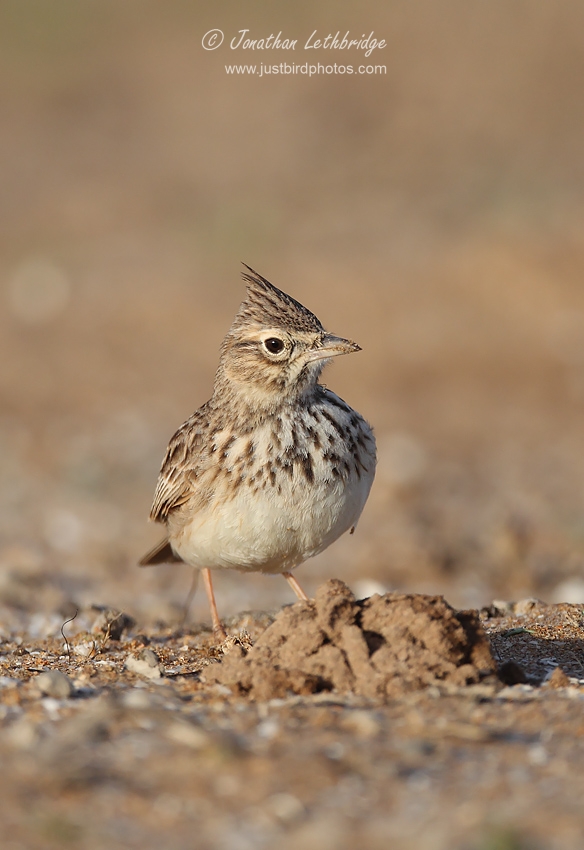 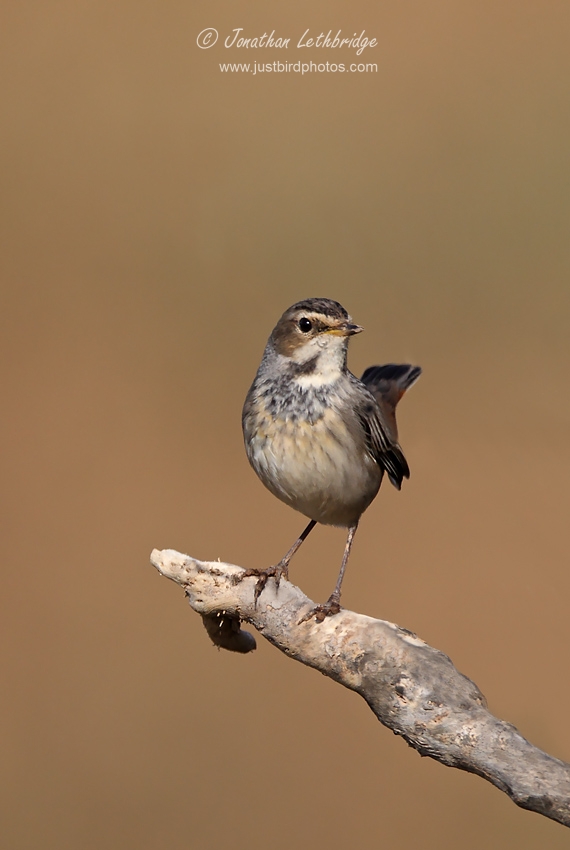 Day 3
After a fine breakfast we started exploring the nearby hills, just as I had done earlier in January. The Zatt was indeed in full flow, I've never seen so much as a single drop in it on any previous trip. We headed up on the P2021 through the Iggrouka forest and onto the plain above, seeing numerous Shrikes and other birds beside the road. Best of all was a Black Wheatear near Towouret, which I spied from miles away as it perched up distinctively on some cairns. The short hike up the slope to its territory was well worth it, and meant that we didn't need to risk the drive over the mountains further east where I knew there was another pair. In the event that was impossible anyway, as the bridge between Timezguida and Timzilite had been washed away by the torrent. Although not as bad as the Guelmin and Agadir area, clearly the impact of floods here had also been substantial. 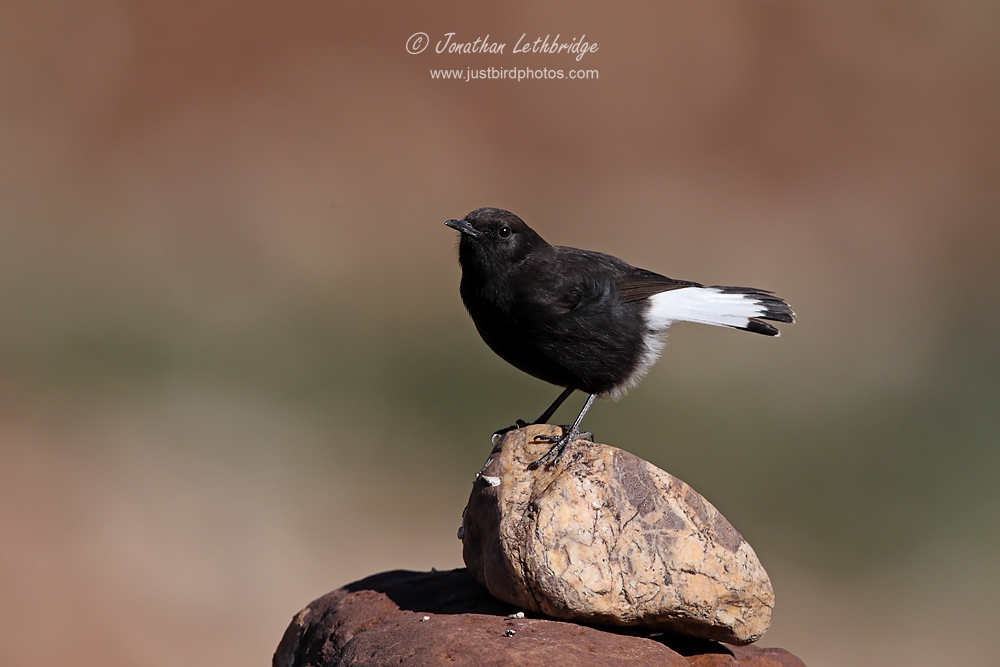 So, turning around we had no choice but to head back to Ait Ourir. The usual White Storks circled the dump, and we took the P2010 out of town in the hope of coming across some bird-attracting irrigation in the fields. A roadside LRP and White Wagtail entertained for a while, but it was all about the Shrikes, which were stationed very regularly along the larger R210 road back west towards Marrakech. Soon however it was time to pack up and head for the airport - the flight departed at half five, and our short trip was at an end. 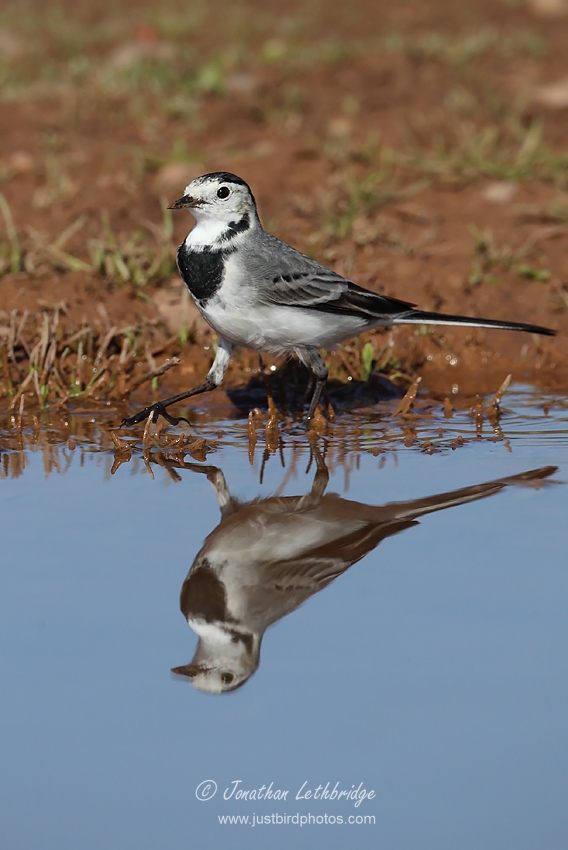 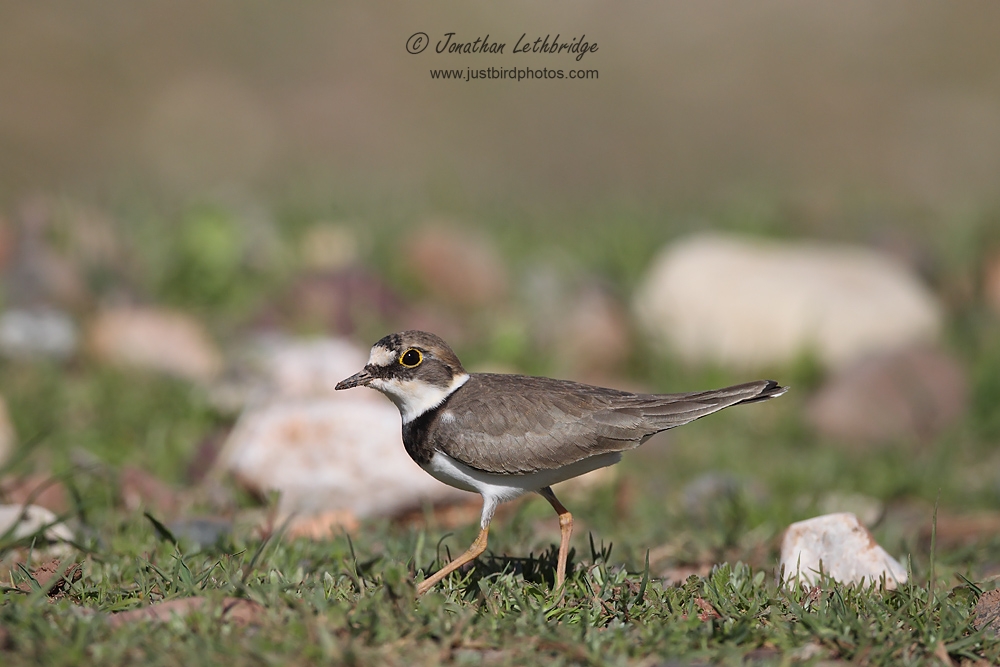 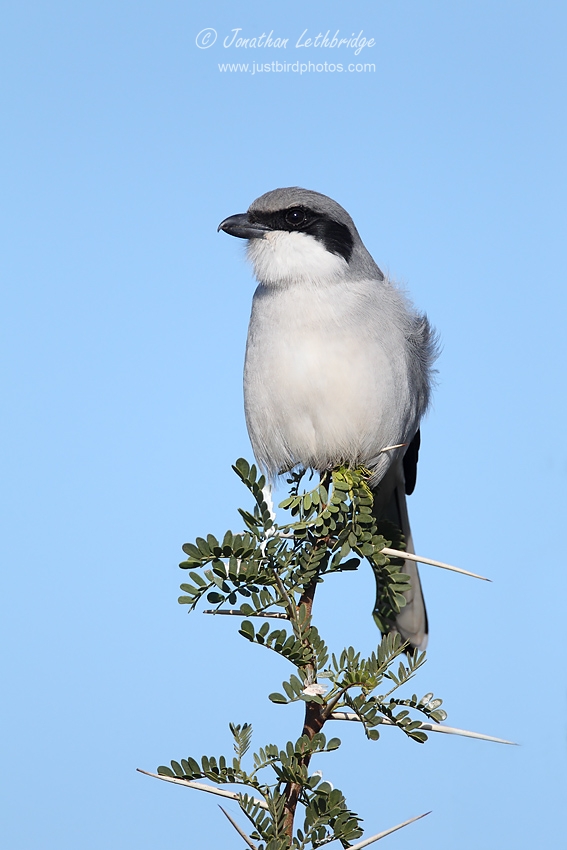 More shenanigans at the airport with Avis, who truly hit rock bottom. Mind you, this is a first world problem, think of those locals having to deal with rebuilding homes and fields. Easy flight back, I had my pick of passport officers at Gatwick and was back in the car so soon after landing I thought it might have all been a dream. The trip list was not high, perhaps mid-fifties, but plenty of decent images to wade through. 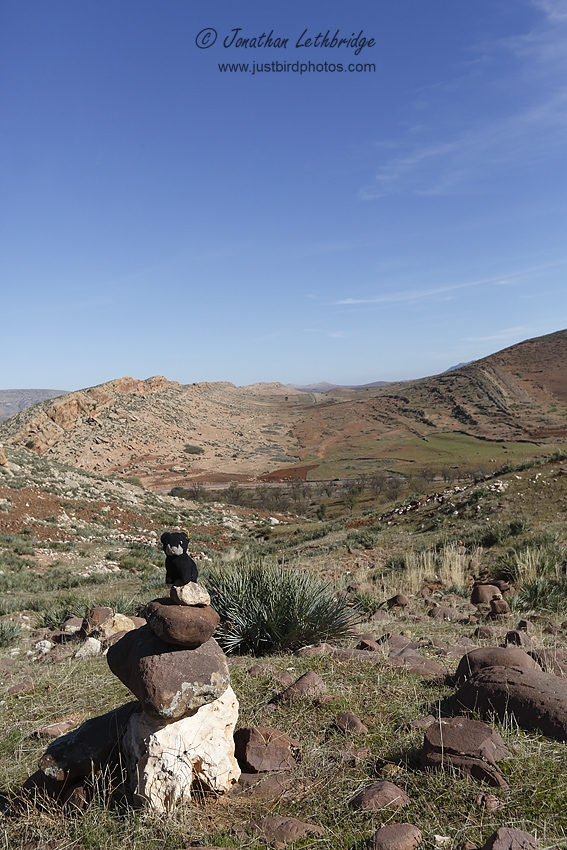 Posted by Jonathan Lethbridge at 18:21