Cornwall for a mega Starling

I’ve seen two Pechora Pipits. Four Buff-bellied Pipits. Four Red-flanked Bluetails. But somehow I’ve only seen two Rose-coloured Starlings. I think I saw a beige one first, and then was lucky enough to see an adult next, at which point I just stopped going to see them. Some may view this as entirely sensible, but this discrepancy has been irking me, gnawing away at me. With a weekend free, and a nailed-on bird hanging around the supermarkets in Penzance, the twitch was on! For such a good-looking bird I even forwent my usual “never on no news” rule, and left at 8pm on Friday so as be in position at Morrison's the next morning. It’s also been seen at other supermarkets though, and so with both Tesco and Sainsburys just next door, I figured that if the prospect of a massive down-market Superstore dip was on the cards it would be easy to go and try the next set of lamp posts across the road. Twitching is all about having a decent backup plan – if your major target doesn’t perform straight away, make sure you know where else to go and look for it.

Little did I know how badly wrong it could go though. My chauffeur for the weekend was a Mr. D Bradnum, and blow me if he didn’t go and drive right through Penzance in the middle of the night! Yep, that’s right, missed it completely in the dark! Ended up at the arse end of nowhere at a place called Porthgwarra, with nothing but thousands of miles of ocean in front of us and not a supermarket in sight!


It just felt wrong from the start. Instead of being confronted with a series of lamp posts and telegraph poles along a pavement, there was a dried up pool and some sallows. Of neon signs, petrol stations and roundabouts there was no sign. Surely we were looking in the wrong place, but there was no way that a hundred other people could have made the same mistake - the place was carpeted in Starling twitchers! How could so many people screw up such simple directions?! I tried telling people that we were looking for Kwikfit, but nobody would listen. This is where it roosted they said. Rubbish! Where was the A30, I asked? But no, they remained in a long line scoping a bit of scrubby cover about sixty feet long that clearly had no Starlings of any variety in it. Talk about misguided! I think I even overheard somebody talking about a Cuckoo at one point! I mean If they can’t even twitch the right species, what hope is there?! Eventually I managed to drag Bradders away and with a bit of skillful map-reading directed him back over the Lands End peninsula and into Penzance, where would you believe it I spotted the damn bird from the car as we were motoring along the dual carriageway. Exactly as expected, sitting about with a group of normal Starlings on a massive lamp post. To his credit, Bradders apologized for initially taking me to the wrong place, and although we had wasted three hours staring at empty bushes, the continued presence of the glorious juvenile Rose-coloured Starling – which hadn’t fallen off its perch in the night as some had predicted– made all of that irrelevant. The long trip down to the south-west was a success, and another one to chalk up to the “never miss” list. These overnighters are always carry a certain amount of risk, but once again the plan had come off. Phew.

With the main target under the belt, we decided to go and clean up on some of the other goodies down there, such as the Lesser Yellowlegs on the Hayle, and a smart Ring-necked Duck on Drift. We briefly considered going to one of the more obscure valleys for a Yellow-billed Cuckoo that had reportedly been seen the previous day, but everybody knows that they always die during the night so we decided to give it a miss despite the monstrous rarity factor. I mean imagine how upset we would have been if we had travelled down purely to see that? Luckily for us we’re not that stupid, and so had a very pleasant day wandering around various parts of Cornwall definitely not thinking about mega Yank Cuckoos at all and what might have been.

The following day we had a poke around a couple of Valleys but drew a big blank bar a Yellow-browed Warbler. Leaving the coast behind, we drove up to North Cornwall to see an American Golden Plover. This is a species which typically stays a long time, as unlike wussy bastard ungrateful Cuckoos they’re pretty hardy souls. True to form the bird was still around, sitting around on the main runway in plain view and looking pretty perky. As opposed to lying upside down under a bush. I gave Bradders clear instructions to move the car only in reverse, and snuck out of the hidden side to crawl around the front bumper. The bird didn’t bat an eyelid. Or die. So I ended up getting some nice photos, including a bonus Wheatear. 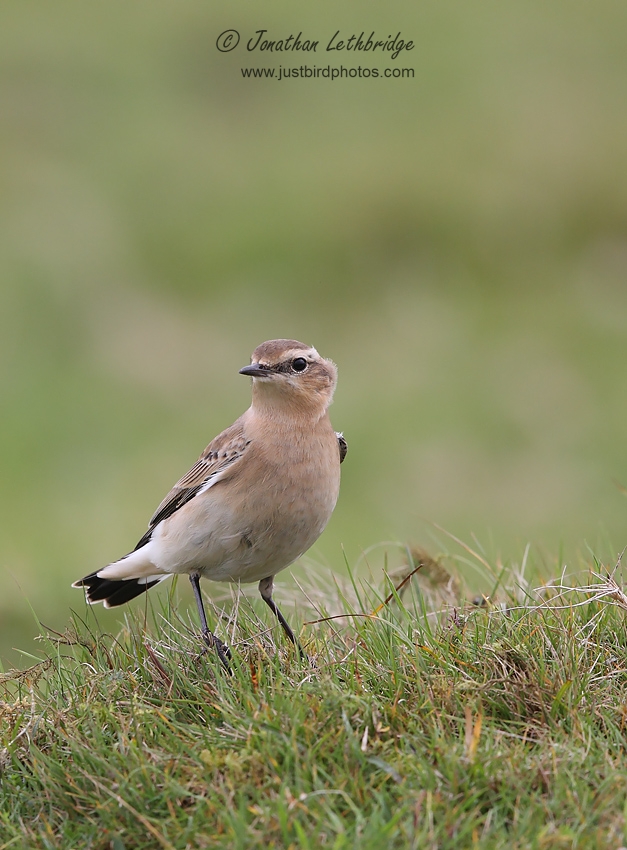 Mission accomplished on yet another of the Starling’s supporting cast, we departed for Somerset and spent the last hours of daylight watching a juv Pallid Harrier, only the third I’ve seen, and thus concluding a rather profitable weekend which included two American Waders and a Nearctic Duck, a Warbler from Siberia, a Bird of Prey from Central Asia, and a mega Starling. Oh, and apparently that Cuckoo or whatever it was wasn’t seen again, and a whole load of people had a massive massive dip. Losers!
Posted by Jonathan Lethbridge at 20:01

Labels: A short trip, Dipping, How to Twitch