The average UK glutton is set to consume somewhere around 6500 calories over the course of Christmas Day, or so I overheard on the radio. That’s the equivalent of 23 Mars Bars. Can you imagine that many Mars Bars on a plate in front of you? Can you imagine eating them all, even across several sittings? I couldn’t even do that with Doubledeckers. Grotesque, yet many of us will nonetheless eat and eat and eat on Christmas Day. A handful of peanuts here, an enormous portion of Turkey here, and don’t forget those delicious mini-sausages wrapped in bacon.....
I’ve been noticing that I have become slightly more rotund (than usual) of late. Pictures at some Christmas drinks showing approximately eighteen chins convinced me that I needed to know quite how bad it was. Shortly afterwards I bought some bathroom scales. We have not had any bathroom scales since the children broke them about two years ago. They denied it of course, blaming that perennial scamp Notme, responsible for most acts of destruction and vandalism at Chateau L. I stepped on the scales, and once I’d shifted my enormous gut to one side, peered down at the dial. Assuming some kind of mistake, I stepped off, confirmed it was at zero, and got on again. Then I got off again, and lay down on the floor to check it was level. It was. With a sense of dread I got on again. Modesty prevents me from sharing the number, but Notme has a lot to answer for. I am heavier than I have ever been.
Buying a set of scales two weeks before Christmas was perhaps very foolish, or perhaps very sensible. It opens up two very distinct avenues of thought. One is that I will take it easy over Christmas and refuse all delicacies, which would be very sad. The second is that I will gorge myself senseless as usual, and along with the rest of the population start a new regime at the beginning of January. This is known as the cop-out option. I’ve not yet decided what I’m going to do. The house is currently filled to the rafters with nice things. Cheese, cold meats, nuts, biscuits, and we are never short of something to drink. I am not sure I have the willpower, which is presumably what got me into this predicament in the first place. 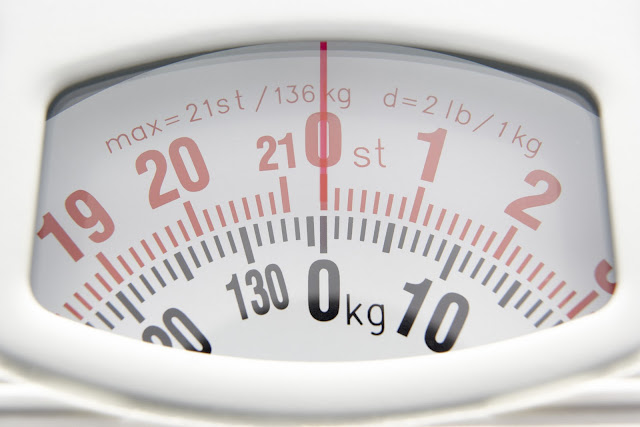 Mrs L has also had a go on the scales. Self-preservation prevents me from divulging any details, but she too was shocked. Pregnancy saves her from the ignominy of a new personal best, but she has agreed that buying the scales, whilst sad, was a good thing.  The scales are the old fashioned sort with a dial, the primary measurement being Stones and Pounds, so it’s also helping the children get to grip with fractions. Muffin is particularly good at fractions, as he showed when Mrs L stepped off the scales looking miserable. “Well?”, I said. “Something and a half” she replied. “.....”and three-quarters!” a small voice chimed in. I know who I believe! Err, Mrs L, obviously.
Almost exactly a week after buying the scales, I have failed to shed a single pound, which is indicative of the cop-out route being taken. Hmmm. To add insult to injury, yesterday I had lunch with two former colleagues. We had not seen each other for a few years, and so naturally the conversation turned to how much fatter each one of us was than the other. Many years ago, when all working in the same team, we started a weight-loss competition. Inspired by another colleague’s tales of extreme weight-loss via means of a beetroot, tuna and egg diet which culminated in him collapsing on a train, we agreed to a weekly public weigh-in, and clubbed together to buy a set of scales which were kept under my desk. Any week-on-week rise was chargeable, with the proceeds going towards a bumper blow-out lunch when the competition was over. I remember that lunch to this day.
Being much younger than we are now, and far more immature hem hem, our weekly weigh-in was keenly contested, with all sorts of random chocolate items mysteriously appearing on co-competitors’ desks in the run up to the appointed time. The critical thing was not to go up. But as each week set the bar lower, you did not want to lose too much weight in a week that would then see you put some or all of it back on the following week, and thus have to cough up. This led to all sorts of shenanigans, such as tactical water-drinking immediately before the weigh-in, and on one occasion an emergency haircut. Being technically and analytically-minded, we kept a running spreadsheet, and I discovered yesterday that one of the guys still had it. It dates back to 2004, when I was still in my twenties, and very happily the password was still “domisfat”, Dom being one of the three competitors. Remarkably, he is still approximately the same weight as he ended up in 2007, which was when our competition finally ran out of steam, whereas I am in a different league. Perhaps the Sekitori league.... Anyway, he only ever gained weight over those three years, and was a major contributor to the lunch. He had some minor victories, but overall the line went only in one direction. Mine on the other hand was all over the place. Over those three years my weight varied by 23 pounds, but the start and end points are exactly the same, so an entirely pointless exercise. I can see that during the first week of March 2007 I lost 6lbs, and another 3lbs the week after that. The week after that required a pay-out!
We’re now talking about starting the spreadsheet again. The intervening four years have not been kind to me, to the extent that we would actually need to increase the range scale on the Y-axis. A large vertical line would ensue, and I would need to lose almost fully 3 stone to get back to my lowest ever point on the graph. Hugely embarrassing, and highly motivating. How I ever allowed myself to fall so comprehensively off the wagon I don’t know. Age plays a part, but I see plenty of people my age who are thin, so I am coming to the inescapable conclusion that I have a thyroid problem. This is hugely relieving, as no doubt it is for many fat people. Yup, that’s right, I have a medical condition. It’s definitely not related to the fact that I eat too much and do no exercise. Glad we cleared that up.
My timing is impeccable - look what I found today on the BBC!
http://www.bbc.co.uk/news/uk-16275027
I sent it to Mrs L. She replied that she loves me. Both of me.
Posted by Jonathan Lethbridge at 16:09